Search advertising still holds the largest market share despite only seeing 8% growth to $20.5 billion in the U.S. in 2015, according to the IAB/PwC Internet Advertising Revenue Report 2015 Full Year and Q4 2015 report released Thursday.

The IAB report points to mobile as being one of the catalysts driving grow across most media. Search media will continue to hold the largest revenue share despite 8% growth in mobile by 2019.

Search may again take the overall lion's share of advertising dollars, but mobile as a device in which to view the ads will continue to see the most growth. Mobile advertising revenue will increase by 23.1% compounded annual growth rate that leads to $60 billion in revenue by 2019.

Merkle, one of the largest remaining independent search advertising agencies, reports that Google search ads delivered strong performance in Q1 2016, as the renewed wave of mobile growth that kicked off in late 2015 remains the key driver year-over-year.

As more traffic migrates to the phone, it puts Google in a better position, as the company remains the default search engine for Apple iOS, as well as owning the Android operating system.

There is a wave of traffic coming in on phones, but clicks are priced less, per Ballard, about 55% less on phones, compared with desktop. Conversions rates are lower on phones than desktop, too.

Overall, 53% of clicks belong to mobile, which includes phones and tablets, among Merkle's clients. Just for Google that number jumps to 57%, Ballard said.

About 95% of paid search clicks go to Google on phones, compared with 78% on desktop, Ballard said. 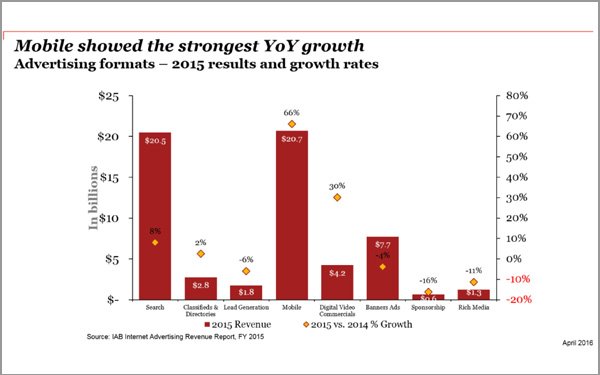