At Google, Artificial Intelligence To Drive Computing, Search And Mobile 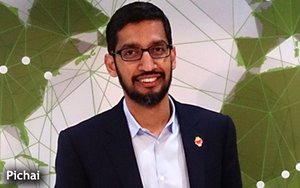 Sundar Pichai, Google CEO, outlined a world where artificial intelligence (AI) becomes central to everything Google does, from driving cloud and computing services to search, ecommerce and mobile.

“We will move from mobile first to an AI first world,” Pichai wrote in the company's annual letter published Thursday. The letter, previously called the "Founders' Letter," because in past years Sergey Brin and Larry Page wrote it, describes the year ahead.

The concept of devices will fade, Pichai wrote, and the software will become the dominant factor as it becomes the "intelligent assistant."

Pichai outlined six areas of focus. Some focus on technology and products, while others represent priorities crossing product lines.

These priorities include search and assistance, machine learning and artificial intelligence, content on YouTube and Play, computing platforms like Android and virtual reality, enterprise, and technology from mobile services to Cardboard, Chromebooks and phones.

Pichai describes a world where automation replaces the manual functions by following through with a physical act to trigger the end result.

"As we look to our long-term investments in our productivity tools supported by our machine learning and artificial intelligence efforts, we see huge opportunities to dramatically improve how people work," he wrote. "Your phone should proactively bring up the right documents, schedule and map your meetings, let people know if you are late, suggest responses to messages, handle your payments and expenses."

In February, Pichai appointed AI guru John Giannandrea to run the search team, replacing Amit Singhal who announced his requirement the same month. His role would allow him to continue an emphasis on machine learning and AI to support search.

Google is not the only company in which its executives see a future in AI. In late December, numerous global tech companies and well-known thought leaders such as Elon Musk, Peter Thiel, and Reid Hoffman, among others, committed a $1 billion investment to OpenAI, a nonprofit AI research company aimed at advancing the technology to benefit humanity.

The group spoke about how advertisements could adapt to human reactions as they become the next step of engagement offline and online, as well as tie together the media. Through software and technology, camera and sensors in desktops and mobile devices, it becomes feasible to run similar types of campaigns in display and search.