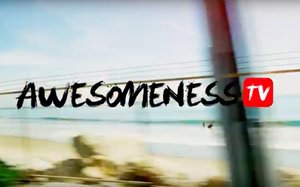 AwesomenessTV’s has widened its reach to 31 platforms--don't ask them to name them all.

At Wednesday’s NewFronts presentation, it added AppleTV and a branded bot that what will live on the youth-bent Kik site, which will allow advertisers to serve up ads in a chat-like environment.

That was one of the headlines of a this-and-that kind of presentation. It had to be somewhat scattershot as AwesomenessTV tried to cover the waterfront.

Now It has staked out two ends of youthful demos, the Generation Z gang that is following millennials, and older millennial moms who are now directed to its relatively new Awestruck lifestyle brand where Awesomeness seems to be investing in well-known personalities, including GloZell Green, Molly Sims and Leah Ashley.

(Also, if you're spotting trends, at least four NewFronts producers now have made a point of noting their special appeal to the millennial couple so busily producing the next generation of exploitable youth.)

But as Robbins and Brett Bouttier, the president, made clear, AwesomenessTV is all around every platform and with new offerings,  including a new Kids’ Games Award through its DreamWorksTV unit.

A second season of “Guidance,’ the go90 serial has become a favorite on that smartphone-first platform; and program collaborations include Royal Caribbean International (“Royal Crush,” renewed for another season) and Major League Baseball.

Those Royal Caribbean and MLB deals have some philosophy in common.

The MLB deal might work the same way, creating a story narrative that takes some of the “old” out of being taken out to the ballgame by parents. (Baseball is trying. Earlier it the day, I talked to a member of Whistle Sports’ adventurous Dude Perfect group who said the league had tried to hook up a commitment by them to have an event at every MLB franchise, but it was too much of a time suck to get done.)

One of the newer wrinkles in AwesomenessTV plans is a deal with a dominant YouTube/social video data Zefr to analyze Gen Z-related content, checked out by over 10,000 types Zefr has categorized, and align those videos with an advertiser most likely to benefit most.

The program, called Signal, is an unusual spin for Zefr; usually it works with brands to find appropriate content, not the other the way around.

Also AwesomenessTV announced a deal with Brightline to link branded experience across the OTT space.

Robbins likes to discuss AwesomenessTV’s incredible growth, and why not?  It launched in 2012, and was sold to DreamWorks Animation for $33 million a year later, the first of the YouTube multi-channel networks to cash out to an established Hollywood player.

In April, Verizon bought 24.5% of Awesomeness for $159 million and earlier Hearst bought the same percentage for $81 million. Then, last month, NBC Universal paid $3.8 billiion to acquire DreamWorks Animation and its stake in AwesomnessTV.

What a short, strange trip it’s been. Robbins says AwesomenessTV gets 1 billion views a year, in large part because it’s paid attention to the curves and watching how youthful viewers differed from those who came before.

“I noticed when a 30 second ad was playing [on TV] it was time for my kids to check their phones,” he said. He observed later, that until they're out of college and student loans come due, for young viewers, “a smartphone is basically a credit card at this point.”