AOL's 'Digital Prophet' Looks At Advertising With A Third Eye 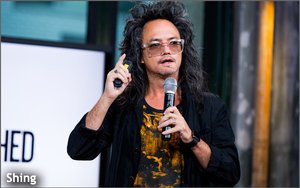 AOL's resident digital profit David Shing, also known as Shingy, travels worldwide and speaks with heads of agencies and brands about the future of advertising. His most recent trip to Los Angeles gave Search Marketing Daily an opportunity to talk about the types of trends that agencies and brands should pay close attention to.

Shing said most agencies and brands are consumed with ad blocking and all the realities such as virtual and augmented, but he's also thinking about platforms, niche networks and personalizing measurement and metrics for each campaign. He contemplates what it means for brands to become empathetic and stand side by side with consumers. Brands often fall into the trap of producing a piece of content to push across all channels and expect consumers to engage magically the same with each.

SMD: You wake up at two o'clock in the morning and cannot get back to sleep. What are some of the things that keep you up all night?

Shing: Some of them are optimistic. Some are pessimistic. There are things that come into vogue and a lot of times I'll vocalize them before the industry has a chance to talk about them. The topics at the moment are artificial intelligence, ad blocking and all the realities, but they're not looking at the social platforms beginning to create their niche networks and locking them down -- these closed networks like private Instagrams and kids hanging out on Snapchat, which is kind of permission-based. The industry needs to look at what brands can do to engage with consumers as opposed to awareness-based advertising.

The other thing that keeps me up at night is thinking about how to move the world of programmatic into an efficient world. What are we doing to deliver the best message at scale? What about building a new type of programmatic creative? Someone must be able to do it. We need to think about building tools that make ads feel more dynamic.

SMD:  Is the industry headed down a wrong path, and, if so, where should we have made the turn? Did we already pass the opportunity?

Shing:  I don't think we're heading down the wrong path. There are multiple paths. The problem with brands is the shiny object and the fact that all brands think they should have one. The truth is they shouldn't. Not all brands should participate in all the platforms. Take Pokémon Go, for example. The challenge is you're part of the game. Some brands integrated themselves well and some did not. Nike did incredibly well. They came out with a range of Nike ID shoes in the colors that give nods to the colors of Pokémon without using their characters. It's all about truth, and if they didn't have Custom ID they wouldn't have been able to customize it so quickly.

SMD:  Does search have a place in virtual reality?

Shing: Initially, there was enough metadata in the browser to know what I'm searching for, because the search engine will finish my search for me. Now you have contextual search, meaning that I have given you permission on my mobile device to understand my location, so give me suggestions. The future will see more predictive search, which means because you've done this and you're located here, this is what you need.

A few years ago my favorite app was Stella Artois [an app based on location that would find nearby bars selling the beer]. I would fire up this app and it would show me a 360 video with all the places serving the beer in a virtual reality. Today they outsourced that experience to Foursquare. … And that makes me feel like search. Without having to type anything in, the location provides the trigger that searches and find the information.

SMD:  Not many search marketers view that experience as search, so how would you convince them otherwise?

Shing: They definitely don't think about that as search because it's not there yet and it's a media that is not easy to buy. People who buy search in its traditional SEO or in a paid ad sense are not the people developing these experiential brand campaigns. So we have a ways to go. That's why I'm optimistic about the marketplace. There's no turning left or right. We still have multiple paths to go.

SMD:  When you look at advertising today, what square piece do brands try to fit into a round hole?

Shing:  Brands want to rush to shiny objects. They quickly go to the how and the what. They don't spend enough time thinking about the why. This moves way beyond the principles of platforms and formats, and all the way back down to what you're trying to do and why someone will actually give a shit about it. People have been talking about real-time marketing, but I would back that out because it's not about real-time. It's about relevance, especially on a small screen.

There was some evidence at Cannes that people were trying to reinvent their products. That's disruption. But it's not the technology that needs disrupting. It's the business model.

SMD:  What's the best piece of career advice you'd ever been given?

Shing:  That's my question to people. Here's the best piece of career advice I have ever been given. It speaks out to me because it's very timely. When people ask me 'why are you at AOL and what do you like about it' --  it is the best piece of advice I got in my 20 years, and it just came from someone I was working with at the time., they said, look to the top of the organization. Look at their life, not their job, and see if you like it or not. Someone could be the best leader on the planet, but their life could be utter turmoil and mess.

The other piece of career advice I got from my dad. He spoke very poor, broken English. And he said, 'work hard and get paid well.' This comes from a man who worked seven days per week in a Chinese restaurant and worked his ass off to support 10 kids.