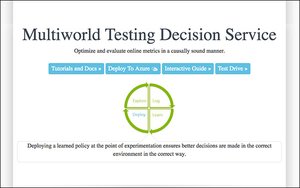 Microsoft Research has been working on building technology that analyzes site visitor's behaviors to optimizes content, pricing and ad serving in real-time. It learns from the actions that visitors take on the Web site to personalize recommendations and news.

The technology will change the way advertisers and publishers think about optimization.

The platform, Decision Service, uses machine learning to make choices on the content to serve in real-time by quickly integrating and processing new data from clicks and views. It optimizes based on the end metric marketers preset in the system, such as increasing click-through rates or purchases, rather than accuracy or precision recall.

An ongoing test with MSN in which the editorial team chooses about 20 articles and their rankings shows how data from views and clicks funneled into the platform in near real time produces a revised optimization model every five minutes. It led to nearly a 27% lift in click through rate and improved the overall engagement with the page, having an indirect outcome by increasing advertising clicks by 9%.

The research and data behind the modeling creates an unbiased evaluation, solving many of the problems behind traditional machine learning in real-time scenarios, Oshri said. "This is important for applications like News, because when a new story gets published you need to react quickly. A breaking news story can become less popular in less than an hour."

The same can be done for ecommerce sites. In one instance that led to a 38% increase in revenue per click the company monitored visits, clicks and purchase through a banner advertisement.

The technology can potentially "site hope" in which the platform optimizes for content, advertisements, and pricing for the same visitor.

The research group, which published a paper on the topic, also tested the platform with a media Web site to recommend videos at the bottom of article pages. There hasn't been any tests optimizing programmatic TV, but researchers say it's possible.

In one test, Microsoft doesn't choose the ads the visitor sees initially, but rather what they see after clicking on the ad, he said. The optimization comes on the second click where the Decision Service chooses the event based on the data.

Privacy also plays a role. Each application of the platform gets customized per publisher, advertiser, or ecommerce site. The user data remains in their respective systems and not shared with other systems. The user information is stored by the application not Decision Service.