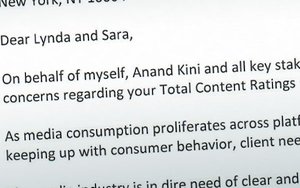 Nielsen has altered the preview of its Total Content Ratings system.

Instead of allowing its media clients to analyze TCR data online as of January 1, it will provide off-line reports. Nielsen will look to have online TCR data available later this month.

The request for the delay came from the TV networks, says Nielsen.

“At the behest of our television network clients, we have modified the way in which we will be sharing data during the agency evaluation period which begins in January,” said a Nielsen spokesman. “We will be making certain reports available to agencies based on our [TV] clients and where they are in terms of implementation.”

The company says the move did not come from criticism of data processing. “This decision is not based on any methodological issues, but rather, client readiness and their need to further evaluate data.”

TCR looks to consolidate all traditional, digital, and other TV/video viewing under one measurement system.

In December, Linda Yaccarino, chairman of advertising sales and client partnerships of NBCUniversal, sent a blistering letter to Nielsen concerning many issues of TCR [Total Content Ratings], including lack of participation from the industry, as well as VOD and OTT measurement issues.

Industry sources says Nielsen met with Yaccarino soon after and went through the complaints point by point.

Mike Bloxham, SVP of Frank N. Magid Associates, told Television Daily News: “As networks themselves decide where --  and even if --  they install the necessary software to make total viewer measurement viable, it's going to take time and work by all involved to get to the level of consistent implementation necessary for success.”

More reports will be produced as more clients come online: “This will allow media clients to customize the data they wish to share, whether it be to focus on particular platforms, programs or demographics,” noted Nielsen

Bloxham adds: “Everybody wants this kind of system, but no one likes the risk of doing things differently.”

Nielsen has been hoping to have TCR system ready for use for TV network buyers and sellers for the upfront advertising market which takes place in summer June-August time period.

Nielsen has previously said: “Total Content Ratings is on schedule to syndicate data on March 1 [2017], at which time Nielsen clients will be able

to use the data for external purposes.”