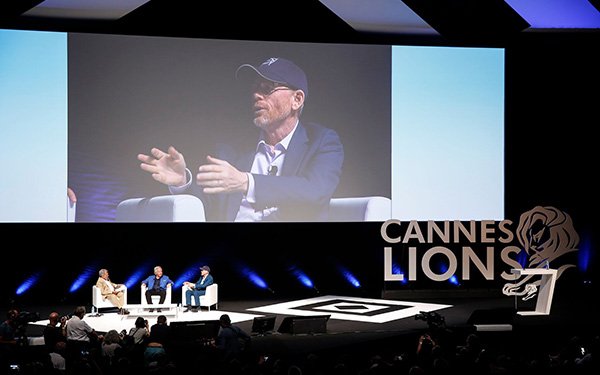 It is an exciting time to work in the entertainment industry, since subscription models like Amazon and Netflix are not driven by ratings and box offices, said Howard. "In many ways, that is creatively very liberating," he said. "And it benefits the creative community."

Panelists expressed varying viewpoints regarding content distribution. Sorrell wondered about viewer expectations when Netflix can spend $10 million to produce a series like "The Crown," while traditional media owners will only spend $3 million.

If viewers expect that level of quality, then that is how the industry will have to adjust, responded Howard. "Our job is to just keep talking."

Kraft says sponsors now expect activations that endure for 365 days rather than NFL season-long initiatives. It is difficult if you are a gatekeeper or investor to know how far to go and how to compete.

"But the audience is always the king," says Howard. "At the end of the day, the viewer is the one who says this is great or turns away." One lesson from the emergence of Amazon and Netflix is the importance of organized marketing, he adds. The level of advertising support is still critical to getting these stories to as many people as possible.

Howard and his partner Brian Grazer recently announced the Raine Group has acquired a majority stake in their production company Imagine Entertainment for more than $100 million. "We have incidentally done branded content, but haven't done it as a business," says Howard.

One reason he appeared at Cannes is to raise awareness for "our appetite for creativity."

Choosing the right people has been key to success for Kraft.

"We are in a business that is ego-driven," says Kraft. "How do we differentiate? Getting quality people." Kraft learned from his earlier career in paper and packaging that big companies typically have divisions within. "

When you are doing well, the question is who gets the credit?" he asks. 'We have played on the inefficiencies of these companies. We brought the same principles to the sports business to get people of high talent to check their ego at the door," he says. "We fight as a family internally, but always have a united front."

Still, Kraft admits he must put up with some nonsense. "Good people are difficult. People who are really talented and off the charts are usually different."

Other notable points of discussion: Howard hopes when this presidency is dramatized years from now, it will be a comedy and not a drama. "That is my hope."

Howard briefly commented about his new job with the "Star Wars" franchise. His involvement goes back to "American Graffiti," when the movie's director and "Star Wars" creator George Lucas mentioned he was working on a science-fiction film. “He just mentioned it briefly, but it stayed in my mind,” says Howard.

Howard and his wife stood in line for two hours to see the first movie and then stood in line another 90 minutes to see "Star Wars" again on the same day, he jokes. "I have been a fan forever."

Kraft diplomatically waded into Deflate-gate. "I don't hold grudges, but I never forget." Sometimes people make bad decisions. I am always about the present and the future, he says. I think it was mishandled, but we ended up winning the Super Bowl. "We have a saying, nothing bad happens that doesn't have some good associated with it. It is life lessons when you are treated unfairly, you carry on."

Howard said he was 1000% wrong that “Moneyball” was not an adaptable movie. He read the script and passed, but admits the movie was extremely well done.

Kraft commented on the widely reported story about Russian president Vladimir Putin stealing his Super Bowl ring a few years ago. He tried it on and then went out to talk with the press, afterward he put it in his pocket as he was whisked away by three KGB members, he said amusingly.

Lastly, the WPP chief revealed that his last name is not originally Sorrell, though he declined to disclose any more details.