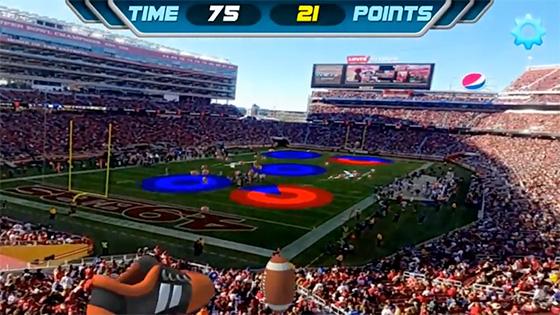 In one of the latest tech twists, one company is planning an augmented reality mobile app for the big game on Feb. 4.

The Virtex Arena from Virtex Apps comprises a football kicking and passing game in which fans can compete against each other during breaks in the Super Bowl action.

The games occur on the actual field with the app adjusting according to a person’s spot in the stadium.

“If you’re at the stadium, you hold up your phone and see it from your perspective, stated Virtex CEO Jeff Green. "Your view of the virtual action is different from the end zone, say, versus the 50-yard line perspective."

The games progress as the football game does and keeps track of team scores while engaging fans who compete. Virtex says the AR game is similar to Jumbotron games during sporting events, except the audience can actually participate.

Fans can also use the AR app while watching the game on TV.

The app comes out next week and Virtex has created a video where consumers can see what the Super Bowl AR experience will look like.