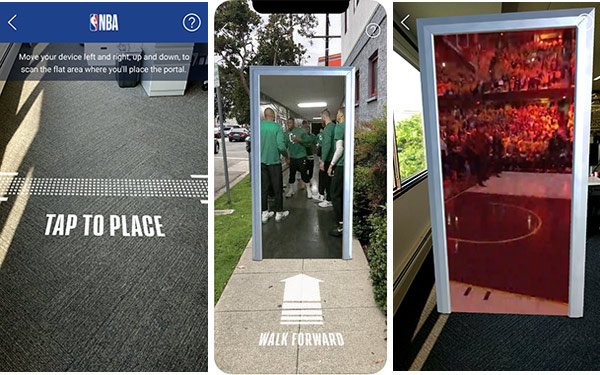 The National Basketball Association is launching an augmented reality experience in the NBA app for the 2018 playoffs and finals, now underway.

The NBA AR app, which launched for iPhones last year, is now also available for Android phones. The new AR features for the NBA playoffs include team huddles, player introductions and post-game celebrations.

The 360-degree portals superimpose virtual doors for fans to walk through, made with Apple’s ARKit and Google’s ARCore technologies. The portals in the free app include on-demand finals content that will be captured and made available throughout the series, according to the NBA.

The 360 portals “will bring NBA fans behind the scenes and onto the court, providing a new way to experience the game through augmented reality,” stated Melissa Rosenthal Brenner, NBA executive vice president, digital media.  “We hope fans around the world check out the NBA AR app throughout the finals for a unique perspective on our biggest event of the year.”