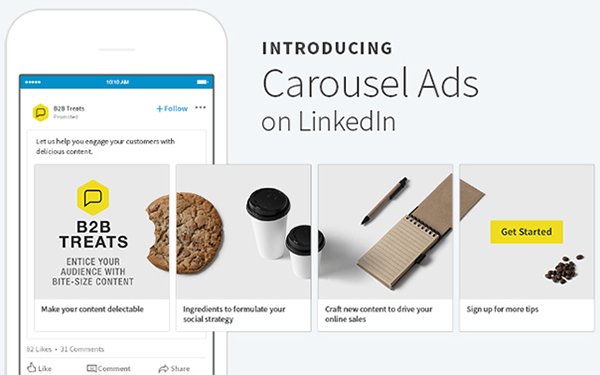 LinkedIn on Tuesday introduced carousel ads for Sponsored Content, which provides advertisers with one more way to tell their brand’s story.

The mobile offering allows advertisers to add character to stories by featuring multiple visual elements that people can swipe through while they are on the LinkedIn feed.

Carousel for Sponsored Content enables brands on LinkedIn to share up to 10 swipeable images on custom cards. As of today, however, video in the ad is not an option.

Since launching the beta, more than 300 advertisers -- such as Hewlett-Packard Enterprise, RBC, and Volvo Canada -- have used carousel ads to create campaigns to tell stories about their company, products and services, Rohan Rajiv wrote in a blog post.

About 75% of the beta advertisers said they will use carousel ads in their next Sponsored Content campaign, largely because of increased engagement and click-through rates.

“Carousel Ads can be purchased on a CPM or CPC basis,” Abhishek Shrivastava, director of product for LinkedIn, wrote in an email to Search Marketing Daily. And although they may seem similar to the concept of carousal ads on Bing, Shrivastava confirmed that the concept and the technology did not come from the search engine.

LinkedIn also set up a webpage that describes how to setup carousel ads for two different campaign objectives. The first one, sends people to the brand’s website or content. The second collects leads using LinkedIn lead generation forms. Also of note, carousel ads using lead-gen forms include a call-to-action button in each image description, while standard carousel ads that drive traffic to landing pages do not.