It's The Audience Data, Stupid 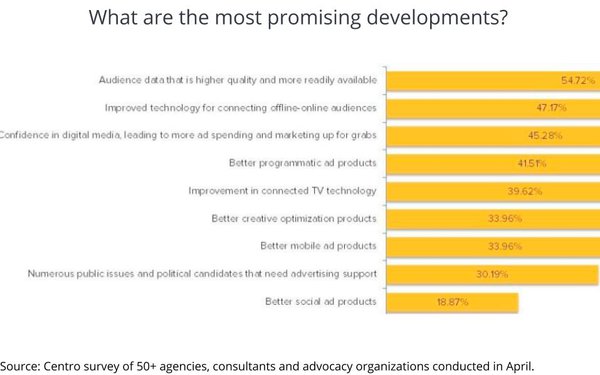 “When we asked what would be the most promising developments for digital campaigns this year, more than half of respondents selected ‘audience data that is higher quality and more readily available’,” says Grace Briscoe, vice president-candidates and causes at Centro and author of a new report, “The Digital Media Trends Political Marketers are Watching in 2018.”

Centro, which helps manage numerous political and public affairs campaigns for agencies and clients, regularly surveys its community to understand what’s on their minds, and conducted a survey of more than 50 agencies, consultants and advocacy groups in April to inform its new report.

“The second-highest response,” says Briscoe, is ‘improved technology for connecting offline-online audiences’,” which she says speaks to some underlying concerns about the confidence in data.

“For political and issue marketers, data is king, despite recent headlines around data usage and privacy concerns,” she writes, adding: “New policies and regulations on governance of people’s data may pose challenges in certain areas, particularly within social platforms, which might explain why social products ranked last among the choices. Perhaps social is reaching a peak, or maybe it just didn’t make an impression (see what we did there?).”

Asked what their biggest concerns were leading up to the 2016 midterms, two-thirds of the respondents cited a perennial issue -- “proving advertising impact to clients” -- but some cited legal issues from the 2016 elections.

“Despite the multitude of headlines on this topic surrounding the 2016 elections, an issue that had the least amount of concern is ‘polling data accuracy’,” Briscoe writes, adding: “Political professionals understand the nuances of how polling works, including its limitations. However, they still have a lot of confidence in its accuracy when applied properly. Interestingly, the choice of ‘fake news or fake ads,’ another headline-grabbing topic drawing tech giants to Capitol Hill for hearings, does not garner much worry, with less than one-third reporting concern.”