The Comeback: Entering The Jerk Store

I almost joined the Angry Mob.

I was walking down Broadway in Manhattan last night, just outside the Beacon Theater, where Steely Dan was performing. There was a man pushing a cart selling anti-Trump buttons and bumper stickers, doing a brisk business — on New York’s West Side, a bastion of liberal thought.

Walking in front of me was a tall white man with a solid build, wearing an expensive sport jacket. He passed the Trump cart and said in a loud voice, aimed at no one in particular “Well, I’m LOVING the economy!” And he continued walking.

It stopped me cold.

I fumbled the answer, like George Costanza in the “Seinfeld” episode “The Comeback.”

You remember it, of course. When his boss notices George wolfing down shrimp cocktail, he says, "Hey, George, the ocean called: they’re running out of shrimp."

George is slow to come back with a response, until later when he thinks up the phrase: "Well, the Jerk Store called, and they're running out of you.”

But, a block past the Beacon, I’m still rolling the comeback around in my head.

“Economy? You mean the trillion dollars the GOP stole from health care and people’s retirement accounts to give to the 1%?” Nope. Too wordy.

Maybe: “The economy? Sure, unemployment is down, if you want to work for minimum wage in retail or fast food. But actually take-home pay is stagnant, and some wages are declining adjusted for inflation.”

Shit. Getting the comeback right is hard.

But his comment continues to irk me. Doesn’t he know his economic gains aren’t earned, they’re stolen?

Maybe if I could respond with a picture? 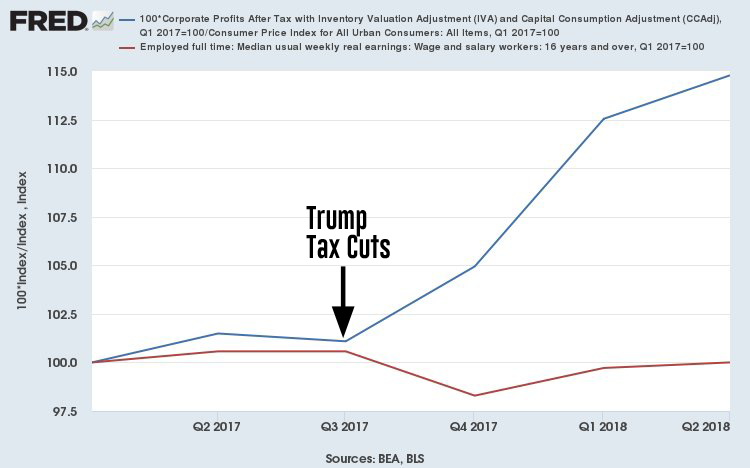 Yeah, that would have done it.

But, back to the angry mob. If by angry you mean I’m concerned about the direction that this country is going in, and the dramatic growth in income inequality — then yes, I’m angry. if by mob you mean I’m joining my fellow Americans to speak out, write, call, email, and show up, then sure — I’m part of the mob.

There’s another word for “mob,” of course. We call them voters.

Are you part of the mob that’s going to vote? If not, email me and tell me why. I’d like to know what will keep you from showing up.

OK, next time, I’ll have a chart in my pocket (I printed out this one), and I’ll show it to him. “Mobbed” with facts, there you go. I found my comeback.

politics
13 comments about "The Comeback: Entering The Jerk Store".
Check to receive email when comments are posted.
Read more comments >
Next story loading