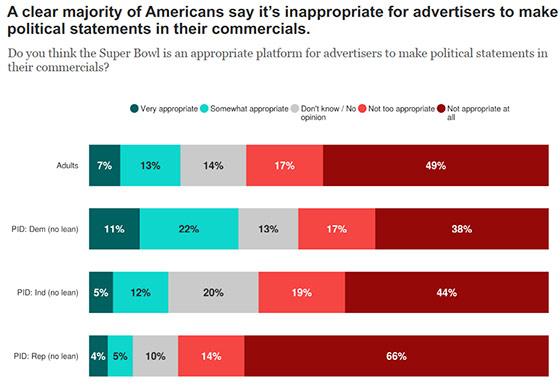 Would it change the perception of Super Bowl fans if they saw political search ads and display, video and social media ads prior to the big game. For example, if an advertiser like Nike insists on stepping up to make a statement.

Super Bowl fans are split in terms of the amount of political pressure from advertisers they will put up with during the big game.

Two-thirds of the 2,201 adults surveyed believe the Super Bowl is not the place for advertisers to make political statements, compared with 20% who think it's appropriate, according to the poll released Wednesday.

Morning Consult conducted the survey for The Wall Street Journal.

There’s a racial difference too. About 30% of Blacks say advertisers should speak out, compared with just 11% of Caucasians.

Interestingly, one-third of Blacks and Caucasians support companies boycotting ads, compared with 27% those who oppose it.

Americans are more likely to have a favorable opinion of Super Bowl sponsors that have ads dealing with issues such as helping veterans at 70%, providing disaster relief at 58%, and civil rights at 47%.

Fans do not want to hear advertisers tout their views on stricter policies preventing abortion, support for policies of Donald Trump, transgender rights, stricter immigration policies, gay rights, and kneeling during the U.S. National anthem, among other things.

In fact, 47% of Americans oppose NGL playing kneeling during the anthem. About 79% of Republicans oppose it and 46% support companies terminating their NFL sponsorship to prevent players from kneeling. Only 21% and 35% of Democrats, respectively, do the same.

The National Football League has the most fans of any American sport, with 58% of those participating in the survey admitting they are fans -- but it’s also the league with the highest unfavorable opinion at 27%.

Still, 69% of Americans are likely to watch Super Bowl 2019 as the two teams square off at the Mercedes-Benz Stadium in Atlanta, Georgia.