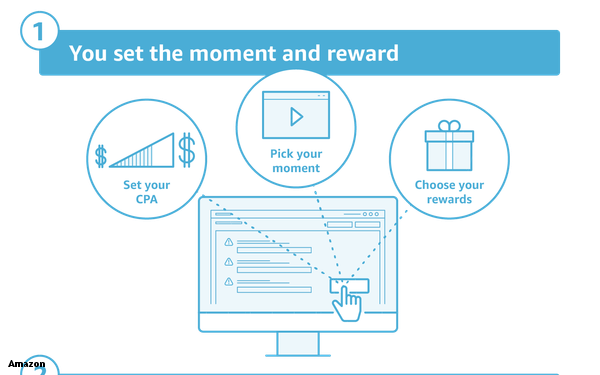 Companies that use the tool will be able to reward users or customers that take specific actions with digital or physical rewards, fulfilled by Amazon.

The company has been testing Moments with a number of partners, including streaming video services, streaming music services, apps, and publishers, and says it is now ready to roll it out worldwide.

“It can be used for anything across the customer journey, all the way from acquisition to engagement to loyalty,” Amir Kabbara, head of digital marketing & consumer innovation at Amazon tells Digital News Daily.

Kabbara says that one subscription app was able to generate twice as many subscribers using the Moments service than it had using different marketing tools, while an entertainment streaming service saw its daily active users (DAUs) improve by 291%.

It works like this: marketers at a streaming company, for example, decide what metrics they want to reward (it could be renewing a subscription, or watching seven episodes of a TV show, or streaming 20 house of music). They go into the Moments console, submit their CPA amount, and Amazon pulls up items that fit those parameters. Marketers can choose a specific reward, or give users a choice of a handful of rewards.

When users complete the action, a unique Amazon link is generated, allowing them to claim their reward. Amazon then fulfills the order as it would for any other physical or digital good, to more than 100 countries. The marketer only pays Amazon when the customer completes the action.

Sesame Workshop, for example, gave a free "Sesame Street" eBook to users who paid to upgrade one of their apps. A streaming music app, meanwhile, wanted to reward users who listened to more than 20 hours per week of music with free headphones or an iPhone case.

Companies can leverage their own research to determine the value of each action. So a streaming video service that finds that viewers are more likely to watch the entire season of a show if they watch the first seven episodes can reward customers for watching seven episodes.

Amazon Moments also connects Amazon’s advertising business with its shopping business, leveraging the scale and distribution it has in commerce to more efficiently deliver in-app rewards for marketing partners.

“Some marketers, especially in the loyalty space, created rewards programs that are points-based, and then had to figure out how to source physical products as rewards, how to get them to the customer, ship them, and so on,” Kabbara says.

Moments was designed to eliminate the need for marketers to source and fulfill their own rewards, and have Amazon do it all instead.

“It is really creating that benefit for both marketers and customers,” he says. “Our goal is to make fun, delightful experiences for customers when they consume digital content.”