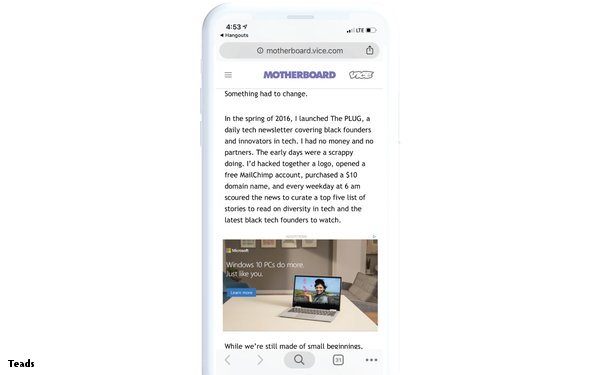 The advertising technology company Teads says it had revenue of $430 million in 2018, accounting for 35% year-over-year growth from 2017, when the company had $317 million in revenue.

Teads cofounder-CEO Bertrand Quesada tells Digital News Daily that Teads hopes to be a billion-dollar per-year company by 2021. 2018 was the sixth straight year the company was EBITDA-positive.

"What is exciting in our industry — and not just for marketers, but for publishers and for brands — is there is an alternative to the Googles and Facebooks of the world,” Quesada says. “The universe of publishers in the world represents an equivalent audience [to tech giants] in terms of size, but with a way more brand-safe and engaging environment.”

The company's publishing partners include CNN, ESPN, Reuters, The BBC, and Bloomberg.

While programmatic still accounts for the majority of the company’s business, newer products, including the Teads Studio and Teads Ad Manager, are increasingly driving growth.

Quesada says Ad Manager accounted for 15% of the company’s business in Q1 of this year.

According to Teads Chief Commercial Officer Jeremy Arditi, Teads’ efforts “has translated into a large number of material advertising partnerships, where we have been given a seat around the table with some of the largest brands in the world, some of the biggest spenders in the world, as one of a small handful of their top partners."

Arditi says: “We give them the scale of the major platforms. How many platforms can give you the reach of a billion people-plus without going out onto an open exchange?”

Some large global advertisers appreciate being able to buy in multiple countries and markets through a single source, he adds.