In opening the conference, ARF President-CEO Scott McDonald underlined the fundamental importance of unified, independent, third-party measurement across each media platform -- including cross-media measurement -- to provide the transparency, accountability and unduplicated reach that all players in the industry desire.

Citing the Media Rating Council’s (MRC) proposed cross-platform measurement standard, McDonald asked whether the “duration-weighted viewable impressions,” proposed for implementation in 2021, could become the currency for all forms of video.

A better understanding of attribution and ROI through further experimentation is another priority for the industry, he added, as well as data privacy vis a vis the ARF’s recently launched code of conduct.

Perhaps saving the best until last, Lisa Ryan Howard, senior vice president of advertising and general manager of media at The New York Times Co., highlighted the company’s significant growth across an increasingly divergent multimedia operations based on an array of editorial content, events and research developments under the unifying banner, “Paving the Way for News Organizations.”

Based on the cornerstone of “What Matters,” the “Privacy Project” launched by the publisher this week will explore all the dimensions and uses of consumers’ own data.

“It’s their data, and our readers want to understand its use in much more depth,” she said.

As data privacy has emerged as one of the major concerns at this conference, the timing of the Times’ major editorial initiative is extremely relevant.

She described how “readerscope” has been developed to better understand the news readers and their preferences via an enhanced editorial topic model classifying content in granular detail.  This in turn has driven “campaignscope,” which provides a finely tuned contextual dimension to audience readership data.

These two initiatives provide critical targeting insights -- whether for readers or advertisers -- at a time when “context” can easily be ignored in the digital programmatic marketplace.

In underlining the Times’ solid financial success with a veiled reference to a certain well-known critic’s characterization of “the failed New York Times” coupled with pictures including a turkey, Howard revealed the paper’s ad revenues have climbed to an all time high and digital revenues have more than made up for declines on the print side.

She also noted that digital readers are willing to pay for quality journalism, which underpins the paper’s “readers first” strategy and its vision that, “truth has a voice.”

The paper’s multimedia line extensions include a new TV program,“The Weekly,” launching this summer on FX and Hulu, as well as a major food festival planned for New York City’s Bryant Park in in October.

With more than 100 million unduplicated readers and 1,600 journalists in 48 Bureaus worldwide, The New York Times clearly is becoming the model for a multimedia, 24/7 “newspaper” in a rapidly changing digital world.  As one member of the audience offered to Howard, “Congratulations on the rejuvenation and please thank the editorial staff!”

That means providing unbiased, consistent, comparable audience reach and frequency based on gross impressions that can be deduplicated, she suggested, adding that measurement must be ubiquitous: “everybody sees everything;” there must be alignment on comparability; and the ecosystem must support it, including “walled garden” databases.

She also underlined the importance of deduplication of cross media platform audiences -- notably for computer, mobile and TV -- to provide a single-source (or pseudo single-source) approach.  In her opinion, “Only this basic approach will drive audience measurement confidence.”

Citing highly detailed media consumption charts over the past 15 years, Clarken postulated, “Linear advertising is not going away” and that, due to multi-tasking, to some extent we are consuming more video than ever, albeit with a significant redistribution of that consumption by media delivery platform.

MRC CEO and Executive Director George Ivie reminded attendees the council was encouraging input on its proposed new standard, which will be receiving public comments until the end of May.

He emphasized that the viewable impression standard has been raised to 100% and the 70 pages of documentation essentially requires cross-media measurement appending audiences to each viewable ad transaction.

The MRC’s standard recognizes the fundamental need for deduplication, including a frequency control mechanism. While its proposed “duration-weighted viewable impressions” approach has been shelved in an appendix until implementation in 2021, it will also be the subject of ongoing industry discussion until it is deployed. 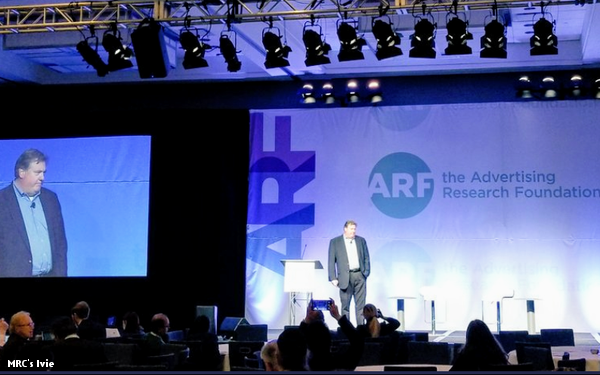