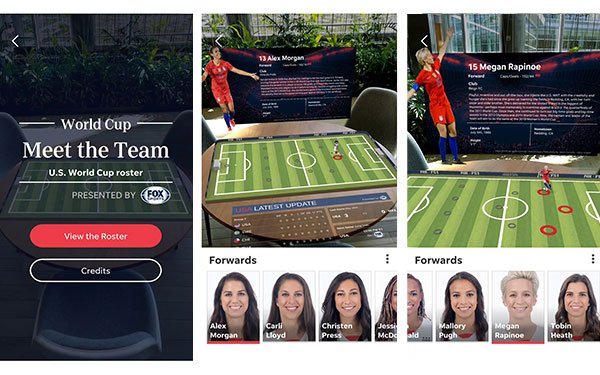 Fans waiting for the kickoff of the 2019 Women’s World Cup later this week in France can get closer to the action through USA Today'sbox of augmented reality tricks.

Two reality interactives, dubbed “Meet the Team” and “Make the Save” -- and part of a partnership with FIFA -- are available on the USA Today app for iOS and Android users.

“We wanted to provide an immersive way to learn more about the U.S. Women’s team throughout the lifecycle of this year’s World Cup,” Ray Soto, director of emerging technology for USA Today, stated.

“Meet the Team” connects users with avatars of individuals players set within a virtual soccer field. Information about each player and a highlighted spot on the field denoting their position accompanies each profile. Users can also access how well the U.S. women’s team is performing alongside rivals, recent scores and game schedules.

Introducing its first gaming AR interactive with “Make the Save,” USA Today gives users the opportunity to have a game-like experience as they practice blocking penalty kicks. Users take on the persona of U.S. goalkeeper Alyssa Naeher, whose likeness was captured using photogrammetry to create a 3D visual.

Naeher’s avatar shares details about her role as goalkeeper, her record and how she defends against the game’s most difficult shots.

The company reports the technology used to create Naeher’s likeness is similar to that used for its recent “Oscars AR: The costumes and creators.”

Last year, Soto told Publishers Daily, “We know people are interested in learning by doing, so we almost treat AR like a pop-up book. It’s a way for users to gain an understanding of scale, but it’s the interactivity that deepens engagement and helps users understand the story.”