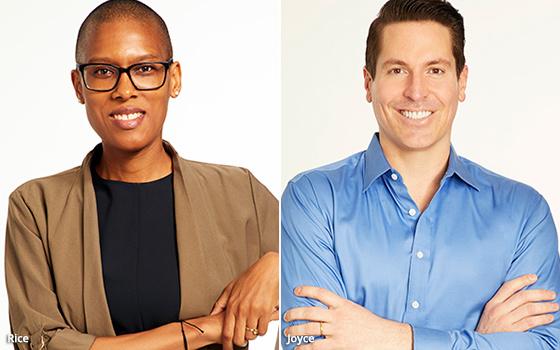 Hearst Magazines hired two executives in its video-production unit as the publisher expands its roster of episodic digital series.

The company named Zuri Rice as senior vice president, head of video development and content strategy for Hearst Originals. She oversees video strategy and the creative direction of the company’s scripted and unscripted series.

Rice previously worked for Viacom, most recently as senior vice president of short-form video for Viacom Digital Studios. She oversaw the production and development of videos content for Nickelodeon’s YouTube and social-media channels. Rice also was a creative consultant for Savannah Media and produced and developed shows for VH1.

Previously, Joyce was senior vice president of East Coast sales for digital media company Defy Media, where he managed the business across the Eastern and Midwest U.S. and Canadian sales territories. Defy shut down in November after a period of retrenchment, Variety reported.

Before working at Defy, Joyce was at Break Media in several senior-level sales roles. He started his career as an account executive at Fox Interactive Media.

This year, Hearst Originals expanded its West Coast operations with the opening of a 20,000-square-foot studio. The business unit has more than 50 original series in production, including Cosmopolitan’s “Beat Your Superfan,” Elle’s “Song Association” and Harper’s Bazaar’s “Go to Bed With Me.”

The company said its videos are viewed an average of 1 billion times a month; it has 20 million subscribers on Google’s YouTube.

Hearst Magazines is among the publishers building out their video platforms amid a broader shift in audiences to digital and mobile media.

Last month, Condé Nast Entertainment and Vogue named Robert Semmer to a newly created role as vice president of video as the fashion magazine builds out its audience for streaming media.

Those changing media-consumption habits have led advertisers to pile into digital media, noted in U.S. trends.

The domestic digital video ad market is forecast to grow 62% to $58.4 billion by 2023 from about $36 billion this year, per eMarketer. The researcher estimates 235.1 million people watch online video, or 83% of internet users.