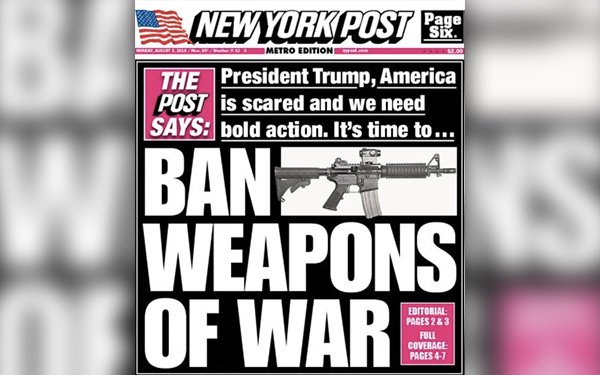 In a move at odds with its usual support of Donald Trump, the New York Post published an editorial calling for the ban of assault weapons to lead its Monday edition.

The editorial follows a weekend that saw two deadly mass shootings happen within 24 hours of each other in El Paso, Texas, where 22 are now dead, and Dayton, Ohio, where nine people have died.

The editorial, written by Lindsey Ellefson, states: “America is terrified. President Trump, you are positioned to assuage that fear. On gun control, you are a pragmatic centrist, someone who knows there is a vast majority of Americans who are not to the extreme left or right on this issue. They just want the killings to stop.”

Ellefson calls on the President to revisit a ban on assault weapons that lasted from 1994 to 2004, when it wasn’t renewed. The editorial states that while the ban may have had limited impact at the time, it only means the next ban should be written better with stronger language and focus.

The editorial can read in full at the New York Post.