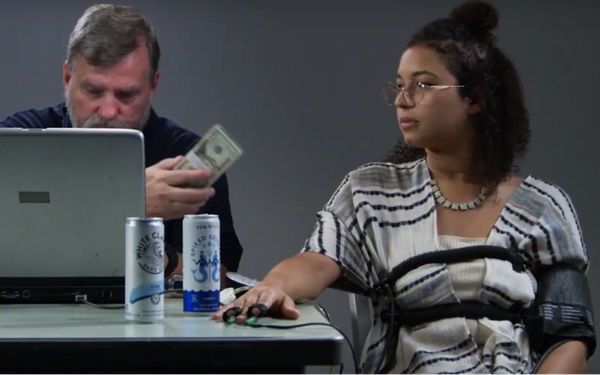 Before this football season goes too far along, fans should be well aware of Bon & Viv hard seltzer, whose TV campaign will start on NFL games later this month.

Actually, fans should already know. Bon & Viv, from Anheuser-Busch's Beyond Beer brands, was an advertiser in last year's Super Bowl.

Still, Chelsea Phillips, vice president, Beyond Beer Brands at Anheuser-Busch, says that 60% of the country is generally unaware of the entire hard seltzer category, and most of them live in the nation's middle states.

“That's NFL country,” she says. And so not only has Bon & Viv signed up as the official hard seltzer of the NFL, but it is being sold in 27 of the 31 NFL stadiums this fall.

In the new commercial, Bon & Viv offers $1,000 to 50 seltzer drinkers who can honestly say they prefer the taste of White Claw, by far the most popular hard seltzer. (Bon & Viv is third behind Truly, the hard seltzer from Boston Brands.)

Results come from a lie detector hooked up by “renowned polygraph expert” John Grogan, well known from reality shows. By his measurements, only four drinkers get the cash.

The commercial is already on digital platforms, where so much of the hard seltzer chatter is, along with another one featuring TV NFL analyst and personality Adam Schefter.

The hard seltzer market has become a $550-million market in the last year or so. According to UBS analyst Sean King, it could reach $2.5 billion in two years. Sales in the category sales grew 164.3% in one four-week period this summer, and 200% in the last year, according to Nielsen data. White Claw is currently claiming its rampant popularity has actually created a nationwide shortage.

Phillips says half the new drinkers were hard liquor and wine drinkers before, but since the hard seltzers can be used as mixers, it's easy to cross over, and flavored non-alcoholic seltzers were already trending.

The alcohol content isn’t as important, she says, although 3.5% seems to be the low-end cutoff for most of them. (There are plenty on the higher end, although those seem to market to younger users who want to party hard and cheap.)

“What really matters are the calories and the sugar content,” she says. Younger drinkers don't care much about those factor, but older ones (and at 30 she puts herself in that category) do. There are 90 calories in a can of Bon & Viv, two grams of carbohydrates and no sugar. Its alcohol content is 4.5%. Claw cans have 100 calories, two grams of carbs, and 5% alcohol content.

The next frontier for hard seltzers is not only the middle of the country but in bars, restaurants and other on-premise drinking places. “There is a lot of runway there,” Phillips says.

For the Beyond Beer unit at A-B, that’s a place to grow. “We already have a strong relationship with those places and with distributors,” says Phillips.

And bars that are already squeezing in more and craft beers probably won’t be able to add many hard seltzer choices, so Bon & Viv wants to be the “one or two” that get stocked. And then there's this: Bon & Viv is now offered on tap, too.