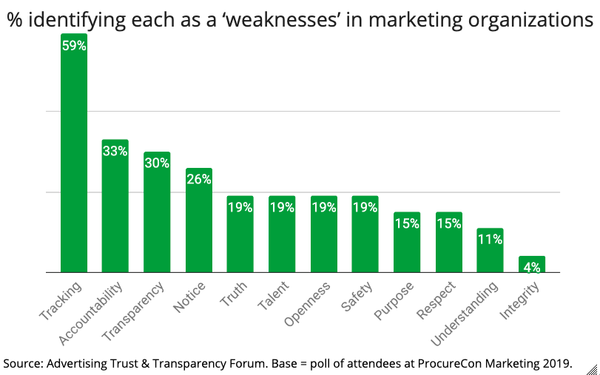 "Tracking," defined as benchmarking the value of a marketing organization's performance over time, was identified as the greatest weakness by the majority of executives participating in a survey taken by the Advertising Trust & Transparency Forum during the recent ProcureCon Marketing 2019 conference in Seattle, WA.

The survey, described as a "snap" poll of 29 marketing executives attending the event, was conducted by Trust Across America Trust Around The World (TAA-TAW) for the Advertising Transparency & Trust Forum. Respondents also identified "accountability" and "transparency" as big weaknesses, followed by "notice," which is defined as seeking out and listening to diverse perspectives.

"Integrity," defined as a marketing organization "doing what it says," was only identified as a weakness by a handful of respondents.

Forum Co-Chair Andrew Susman said the survey's goal was to help get a handle on how marketing executives view the strengths and weakness of various factors influencing trust inside their organizations.

Susman says the forum is taking a broader focus in its second year, including "raising the dialogue and connecting all constituencies" with "technologies of trust," including the procurement departments of major marketing organizations.