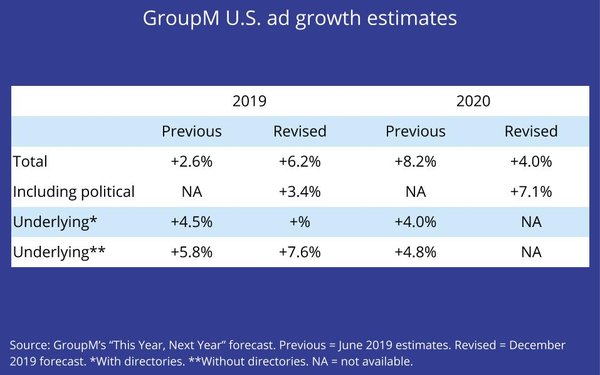 GroupM now projects U.S. advertising will expand 6.2% to $244 billion in 2019, a marked increase from the tepid 2.6% expansion it projected for 2019 in its last report published in June.

The U.S.’s underlying growth, excluding directories, also improved to 7.6% in GroupM’s revised forecast, up from just 5.8%, which it projected in June.

“This will mark a fourth consecutive year of solid mid-single-digit growth for the industry on an underlying basis,” GroupM Business Intelligence Global President Brian Wieser noted, adding, “However, we look at it, growth has been robust relative to the general economy, which is generally decelerating on an underlying basis.”

“We expect some softening next year as the economy reverts toward normalcy after a period of growth likely supported by factors including the 2017 domestic tax cut, an expanding federal deficit and low interest rates,” Wieser explained in a note sent with the latest edition of GroupM’s “This Year, Next Year” report covering its 2020 U.S. ad forecast.

“As the effects of these fade, heightened trade barriers should concurrently become a drag on the overall economy. The 2020 Olympics also likely provide some marginal benefits, although we note that it can be difficult to identify the degree to which Olympic activity captures spending that would already have occurred or if it causes incremental spending to flow into the advertising market.”