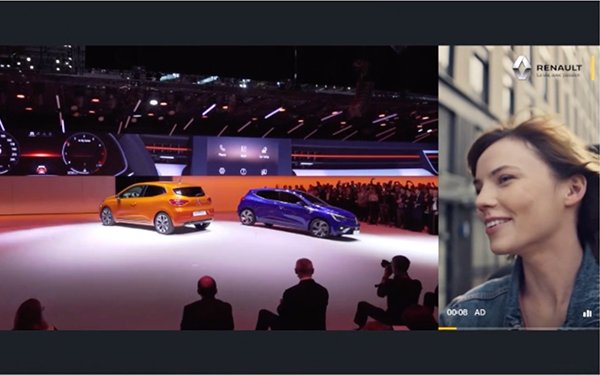 French automobile manufacturer Renault tested a new vertical video ad format introduced Tuesday by Dailymotion that briefly slides into the media player from the right side and shares the screen with the content.

Renault experienced a 97% completion rate with VerticalVue during the beta. The 6-second ad created by Publicis Conseil to promote the Renault Clio ran through Dailymotion inventory in France on desktop for most of June 2019.

The side-by-side content and ad unit seem to create a tighter bond between the brand, consumer desire and intent. “We know there are a multitude of opportunities to serve consumers ads but regardless if the placement exists, it doesn’t necessarily mean ads will be effective,” said Damien Prybis, head of digital trading at OMD. “VerticalVue allowed us to test a vertical format in a horizontal context that proved to be more impactful and less disruptive for Internet users.”

On the left side of the media player the viewer sees the content, while on the right side they see the ad. Both the content and ad play simultaneously, but the viewer can only initiate the sound for the advertisement by placing the cursor over the ad on the right of the screen.

The specs for VerticalVue align with additional vertical ad formats such as Snapchat and Instagram Stories, so advertisers can extend the life of creative used for other vertical formats.

The Ad’s message showcased Renault’s new Clio, a popular automobile in Europe. While the vehicle has a fan base, the format in which the ad ran was more successful than other formats, Prybis said.

The ad also links to other types of media, such as a variation of the TV advertisements for Renault’s Clio.

Data from the beta test has helped Renault and its agency partner evaluate the impact that a vertical ad format has on the audience’s engagement rate, allowing the two to determine the best route for future campaigns.

Dailymotion used its “Topics Targeting” feature to enable hyper contextualization. Topics Targeting enables advanced capabilities, such as targeting more than 500,000 topics to ensure that the ad is placed next to the most relevant content.