The week after CES, for those of us who attended, is a bit like the aftermath of a powerful energy drink: it's incredibly invigorating at the time, and then reality sinks in again on Monday with a thump. How do we make sense of -- and practically apply -- what we have seen and learned?

One of the big questions coming out of CES is which innovations will scale and have enough sustainable consumer interest. The next logical question is which consumers will adopt the new technologies the fastest.

An enduring assumption for technological innovation is that the earliest adopters tend to be young, affluent males. After spending two years leading tours on the floor of Tech West and Eureka Park, I noticed there were some real differences in generations and genders when it came to response to new technologies, and that I needed data to prove out the anecdotes that I heard on the floor.

This year, we partnered with consumer insights platform Perksy to get an in-the-moment read of which innovations appeal most to Generation Z and Millennials.

One of the challenges with doing this kind of research with younger generations is that you need to express innovation in a relatable way to get a fast, engaged response.

Perksy, with its gamified mobile app that rewards users for answering questions, gave us a way to read the zeitgeist in 48 hours, fielded and analyzed over this past weekend. Some elements of this survey we fielded in 2019 as well, so we have established benchmarks as to how this space is evolving.

First, it's important to understand how the generations view technology generally before we get into what interests them specifically.

Here’s what interests me: Generation Z females are much more interested in technology than their older female counterparts, with 77% of that group interested or super interested, versus 65% for Millennial females. This is a much bigger gap than in the male cohort.

Now on to the innovations. We asked the group what they would like to try and what they had no interest in trying. The top innovations coming out of CES were self-driving cars, high-definition televisions like 8K TVs, sleep technology and smart appliances. 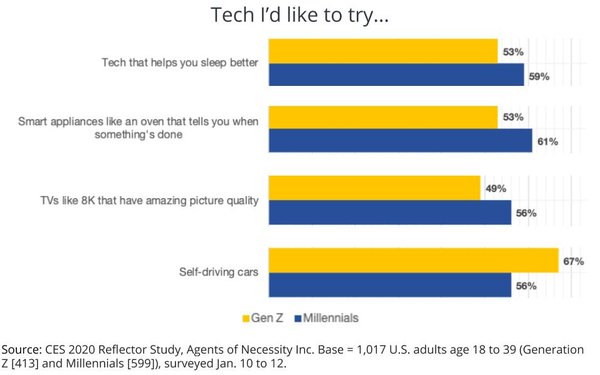 Gender and generational differences tell a more interesting story. It seems the male cohorts are out to prove stereotypes correct, with big TVs, self-driving cars and haptic gaming suits being the innovations in which they are most interested.

For the female cohorts, sleep and smart appliances are king.

Millennial females, who tend to be not that interested in technology generally, are really interested in smart appliances (65%) and sleep technology (61%). This is a shining example of a data point that validates what I heard on the floor of CES. Innovations like Sleep Number's smart temperature-controlled biometric-monitored bed have a definite market with Millennial women.

What technologies didn't appeal? For all the noise on foldable phones, this doesn’t seem to resonate across the generations or genders. The other innovations that didn’t appeal are decidedly futuristic.

Technologies that use brainwaves for an interface are really unappealing -- 43% of Millennials would never try it, versus 32% of Gen Z.

However, the innovation that both generations reject the most significantly are companion robots/robots in the home, with 46% of Millennials and 42% of Gen Z “just saying no” to the cute little robots we saw on the floor, like the Lovot from Japan. These high rejection numbers trace mostly to female respondents, and they are exactly in line with our numbers from last year’s survey.

Stepping back from the data, a few things are clear: there is no "one size fits all" stereotype of the early adopter. For each nascent technology, the generational and gender appeal varies greatly.

Another truism is that both generations are attracted to technologies that are mature variations of the familiar -- with the exception of foldable phones.

Lori Schwartz of StoryTech, who has seen many CES shows, noted: “I think lifestyle tech is really challenging the stereotypical concept of an early adopter. We now have to think about consumer segments by technographics rather than demographics. The AARP Lab is a perfect example of this.”

How can innovators -- and marketers -- gauge the right generational and gender appeal going forward?

Part Two of our report explores the different attitudes to algorithms, assistants, AI and data to complete the picture.

In the meantime, just remember: no one likes robots. Unless they’re on an 8K TV.