Ad Industry Intel Shows Half Have No Plans For AI 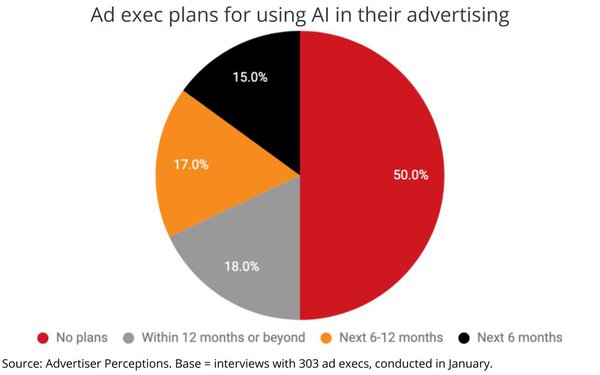 For all the industry discussion surrounding artificial intelligence, half of ad executives say they and their organizations have no plans to begin using it.

That's the finding of interviews with more than 300 ad executives -- both advertisers and agencies -- conducted by Advertiser Perceptions in January. Oddly, the percentage of ad execs who say they have no plans to deploy AI in their advertising actually rose 14 percentage points from a similar survey conducted in April 2019.

Advertiser Perceptions' analysts attributed the inertia to a lack of "centralized authority" related to AI inside marketing organizations, noting: "Among advertising executives whose companies are using AI for marketing, only 27% say that they are in charge. For the rest, responsibility is spread out. For example, the Chief Technology Officer runs AI in 7% of companies, while the Chief Information Officer, a Director, or the Information Technology department each run AI in 6% of companies reporting."

The study, however, implies that a "decentralized" approach to AI management is "bringing more people into the media conversation," noting that 58% of the executives currently controlling AI currently are involved in "media selection and buying."

“Big-budget brands like Nike, IKEA and Sephora are pioneering AI for marketing, but most advertisers don't have their resources," noted Advertiser Perceptions' Frank Papsadore, adding: "so they're focusing on more immediate marketing efforts. For ad tech and the media, this presents an education opportunity. When advertisers have best practices and proof, they'll feel more confident devoting resources to AI. The prize will go to the sellers that show advertisers simple, efficient ways to take advantage of AI technology.”