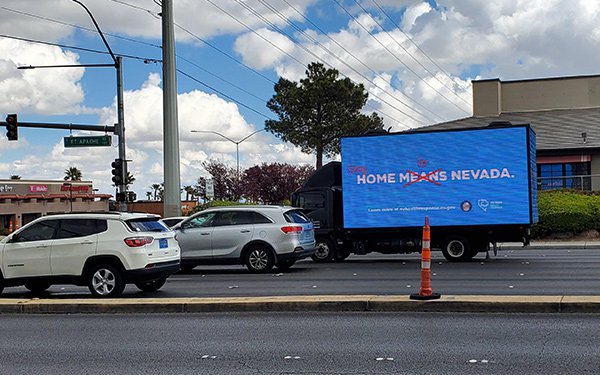 COVID-19 shook the Las Vegas economy by forcing restaurants, bars, and casinos to shut down. The virus forced Jeremie Watkins, managing partner and co-founder of Kre8 Media Outdoor Advertising -- which supports many of the businesses such as Caesars Entertainment with LED screens and mobile billboards -- last week to lay off about 130 employees and furloughed 30.

Watkins and his partner basically shut down the business for about 30 days and hit pause on all campaigns on March 15. “We sent out a memo to our clients and told them we would put their campaigns and contracts on hold,” he said. “This is not a good time to keep charging our clients, because we’re in it for the long haul.”

Kre8 Media gave its advertisers two options -- either pay for the entire month and hold half a month credit that they can use at any time, or just pay for the half of the month to advertise.

On March 17, 2020, the city of bartenders, housekeepers, card dealers and servers went dark. On Monday, Nevada reported 55 new cases, bringing the total of COVID-19 to 245 for the state.

Kre8 Media also has a fleet of mobile billboards, so Watkins asked the company’s creative director to design public services announcements (PSAs) that remind people to self-quarantine. He contacted Nevada Governor Steve Sisolak’s office with the idea of donating a week of advertising with these stay-home messages.

“We thought it would be a good way to keep our drivers employed at least for the next week because we understand they may live paycheck to paycheck,” he said. “Businesses on the strip may be closed, but there’s still quite a few people out there.”

The three PSAs were sent to the Governor’s office, which approved the messages to stay home. Retail, the five ads cost between $40,000 and $50,000 for the week, which also pays for insurance and gasoline, among other expenses.

Watkins hopes the Governor’s office will pick up and continue the campaigns, so he can keep his employees working.

“When everyone is operational again, companies will be putting forth max effort to get people back to Las Vegas,” he said. “We’ll hold out until then, as long as it takes.”