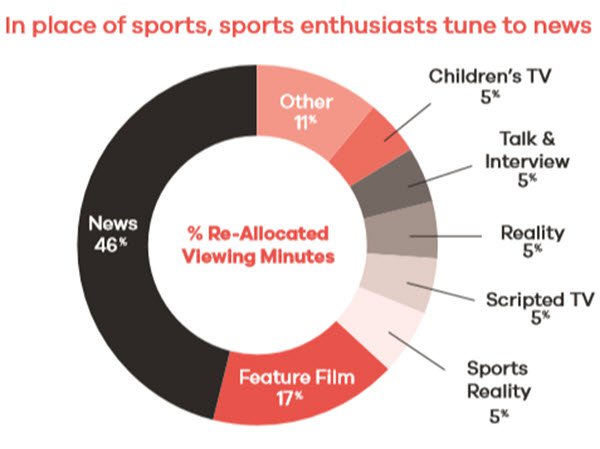 Fans may be suffering due to the suspension of most sports events/coverage, but it’s not stopping them from watching more television and VOD than usual — news in particular — while they’re sheltering at home during the pandemic.

Sports viewers as a whole increased their overall weekly viewing by 10% during March, versus February, despite an 87% decrease in sports event viewing, according to a new analysis from AT&T ad-serving platform Xandr and AT&T Labs.

The analysis is based on set-top box viewership data from DirecTV and Nielsen syndicated media research across AT&T’s platforms, including AT&T TV.

Light sports viewers (those averaging only an hour per week of sports content) increased overall viewing even more -- up 18%.

The heaviest sports viewers — those averaging three daily hours with sports content — spent a full 23% of their total weekly viewing hours with news content during March.

Nearly half (46%) of their sports viewing minutes were re-allocated to news. Feature films claimed 17% of those minutes, and “other” 11%.

The most-watched sitcoms among sports fans were “Friends,” “The Big Bang Theory,” “The King of Queens,” “Two and a Half Men” and (lest they forget) “The Office.”

Looking at broader consumer viewing patterns, live viewership was up significantly on a year-over-year basis in March.

DirecTV’s average rating in the past four weeks was up 14% versus the prior four weeks, and up 16% year-over-year.

News viewership was up 85% YoY, and lifestyle and reality-driven entertainment networks saw double-digit growth in the week of April 6 versus the four prior weeks.

Streaming and time with connected TV were also up. During March, viewers spent 139 more minutes streaming compared to the previous four weeks, and total CTV time was up 19%.

The number of programs watched on video-on-demand jumped 52% in March versus February.  On-demand viewing of feature films and children’s feature films more than doubled — up 102% and 112%, respectively.

Not surprisingly, binge-watching soared.  More than half (55%) of DirecTV viewers binge-watched at least one day per week in March, up 8% versus February.

Two-thirds of March binge-watchers also binged in February, ad 71% of repeat binge-watchers maintained or increased the number of days that they engaged in the practice in March.

On average, binge-watchers are viewing five to six episodes on each day that they indulge.