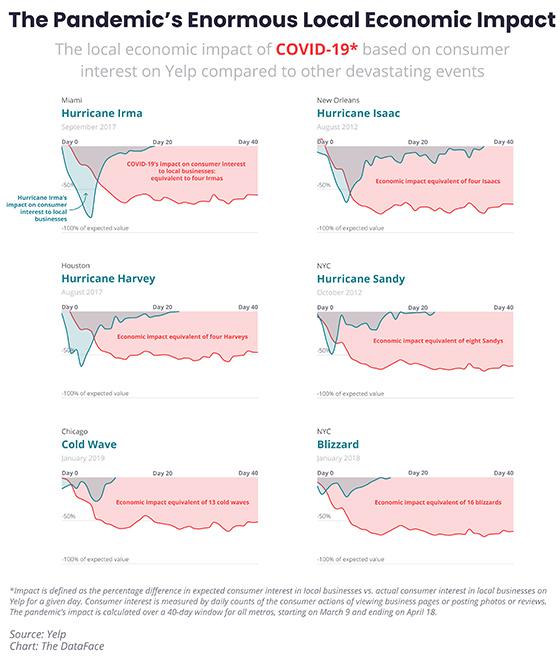 Small and medium-sized business became the most vulnerable to closures in the United States during the COVID-19 pandemic. The failure of these businesses also impacts advertising agencies and especially Google and Bing, which depend on ad dollars to thrive.

A report from Yelp released on Tuesday analyzes the impact of COVID-19 on small businesses, using internal data from the company’s platform. It likens the impact on local urban economies to “four or more times the magnitude of the biggest prior economic shocks they’d experienced in the last decade, such as major hurricanes.”’

Carl Bialik, data scientist editor at Yelp, said rapid change surprised him most -- for example, how companies changed their business models and how consumers adapted their behavior. They did so consistently across the U.S. and almost instinctively.

“How big the impact" also surprised him, he said. “We’re used to looking at reports that identify change, but these reports reflected really big changes in behavior.”

Rather than analyze the first quarter in its entirety, Bialik and team pulled apart the days and weeks to show the full impact of the pandemic. He said the analysis also extends into the second quarter by a few weeks to look at never-before-published data such as business closures and review text. It also compares the weeks to historic economic shocks.

Those businesses that could remain open adapted and changed -- some better than others. Some pizzerias, fast-food, and restaurants selling chicken wings managed to shift faster to support consumers as they dined at home and required deliveries. As people stopped dining in restaurants, the ratio of searches for dining-in versus takeout rose 300 times in a couple of weeks.

Yelp searches also showed how people were interested in emotionally helping friends and family through reviews, which will become more important in post-pandemic lockdown days.

Interestingly, recent reviews left on the digital doorstep of businesses mention celebrations, suggesting that people want to offer tangible advice for each other. People are noting the health measures taken by businesses. Mentions of sanitizer, gloves, and phrases related to keeping physical distance from each other began to rise right when the other economic shifts took hold, in the second week of March. Reviews also mention when people wear masks.

Mentions of service staff have dropped off by under 2% of reviewers from a typical rate of more than 10%, suggesting a decline in consumers interacting with service staff and instead adopting other ways of transacting, such as curbside pick-up or contact-less delivery.

And by the end of March, roughly one in six reviewers each day mentioned COVID-19 by one of its names.

There's a lot of talk about reopening the economy, Bialik said, adding that he will keep a close eye on how businesses try to return to pre-pandemic days as economies attempt to get back on their feet.
behavioral targeting, consumer, covid-19, data, economy, restaurants, reviews, search, small business, yelp
Next story loading