Association Chiefs On Innovation, Collaboration And Flattening 'The Curve' 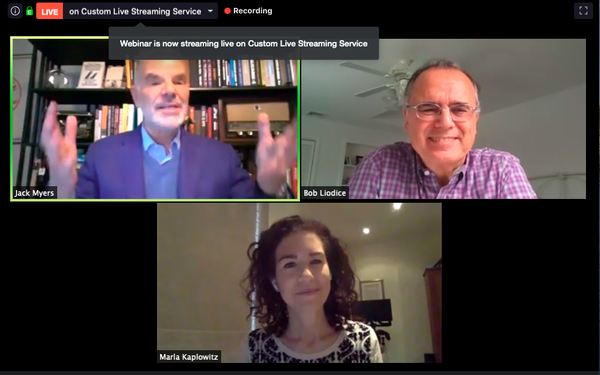 During a joint webinar Monday the heads of Madison Avenue’s two top trade associations talked about the impact the pandemic has been having on the ad biz, how the tiff between the two organizations has been “way overblown,” and that the “curve” may finally be flattening out on one of the biggest threats to the agency business. No, not that curve.

“We’ve seen a proliferation of the use of in-housing,” Association of National Advertisers CEO Bob Liodice acknowledged during the webinar, which featured his 4As counterpart, Marla Kaplowitz, and was hosted by Media Village’s Jack Myers.

Liodice said the trend toward big marketers in-housing their advertising services started with “simple marketing tasks like packaging design,” and exploded in recent years to include many traditional ad agency services such as “creativity development” and programmatic media-buying, but he said he sees it “kind of flattening out.”

“I think over the course of time, you’ll see a leveling off and a deepening of the focus on those activities that have remained in-house and those that are given to their external agencies,” Liodice said, adding, “I don’t think we’ll see a continued rise in the substance of in-housing.”

That prediction was consistent with the underlying theme of the webinar, which Myers characterized by what he suggested could be the word of the year: “us.”

From Liodice’s point of view, the future of advertising will depend on that word, including greater “collaboration” among all of the industry’s stakeholders -- advertisers, agencies, and media suppliers -- to help solve the big problems facing big marketers.

Even before the COVID-19 pandemic disrupted many marketers’ businesses and much of their advertising and media-buying plans, Liodice said big brand marketers were already struggling to deal with big challenges, including the massive media supply chain, but especially the inroads direct-to-consumer startup brands.

He also downplayed the tensions between the ANA and the 4As, noting that the two organizations are almost inextricably linked through a number of joint industry initiatives, and at least one joint venture (Ad-ID), and that they are actually mutually interdependent.

“It would take you a long time to count up where we have done things together to deepen client/agency relations,” Liodice said, adding: “We’ve had a great relationship with one big exception.”

That one exception, of course, was a series of events in 2015 and 2016 intended to shed light on some questionable and less-than-transparent practices by some agencies, including kickbacks and rebates from the media.

“The discord between the ANA and the 4As was way overblown,” Liodice said.

The 4As’ Kaplowitz seconded that point, noting that since the pandemic crisis began, she and Liodice interact almost daily.

“We probably speak four out of five days a week since this whole thing began,” she said.

Both Kaplowitz and Liodice said some good things have come out of the crisis, including the fact that the ad industry has performed well vis-a-vis consumer trust and now actually ranks above many other industries, including the news business.

Kaplowitz also pointed out that the pressure to generate new ad campaigns without conventional supply chains of production companies and resources has forced both agencies and their clients to innovate and become even more creative, noting that in many cases, that required removing “middlemen” and extraneous processes that might have slowed or bloated the ad production process in the past.

One thing not likely to change anytime soon is the 4As welcoming in-house client agencies to become members of the trade association.

After noting that the 4As finally accepted media services agencies as members after long blocking them, Myers asked Kaplowitz if it might also one day accept in-house agencies.

“At this point, I don’t have an answer,” Kaplowitz told Myers, adding that as the 4As approaches its 103rd anniversary, “clearly the industry changes and evolves.”