Performance Marketing Gets A Lift As Advertisers Look For Guarantees 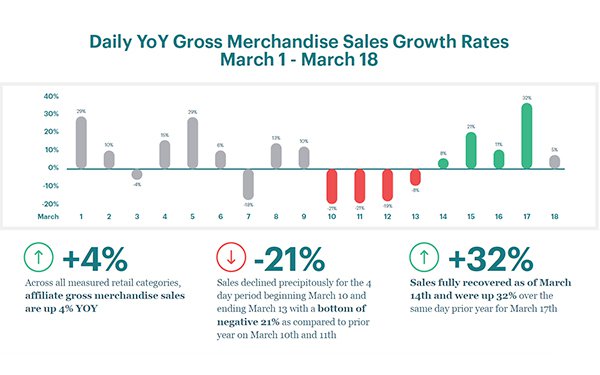 Affiliate channels saw increased activity in April. More brands are turning to performance channels because advertisers only pay when they see success -- for example, with a sale or generating a lead.

Amazon in April told members of its affiliate program it planned to cut commission rates beginning April 21. Rates were cut for several product categories. Furniture, for example, fell from 8% to 3%. Some categories fell to 1%.

The last couple of months had their ups and downs. Overall, sales declined from March 10 to 13, dropping 21% during this time, compared with prior year on March 10 and March 11. Sales fully recovered on March 14, rising 32% compared with day in the previous year, which fell on March 17.

Across all measured retail categories, affiliate gross merchandise sales grew 4% year-over-year (YoY). The bright spots identify that food and drinks rose a whopping 94%, where sales have been up daily throughout the month peaking at 542% growth on March 8, compared with the same day in the prior year, and exceeding more than 125% since March 14.

Another bright spot, gifts and flowers rising 80%, computer and electronics up 66%, health and beauty rising rose 41%, home and garden up 28%, and sports and fitness up 6%.

Here’s the breakdown on certain categories. Take health and beauty, for example.

Products in this category mainly rose as everyone at home tried to make up for salons and barber shops being closed. Sales declined between March 10 and 11, dropping 16%. Sales recovered on March 12, rising 173% over the same day in the prior year on March 15.

Affiliate gross sales for accessories and jewelry fell 37%. Sales have been down daily throughout the month.