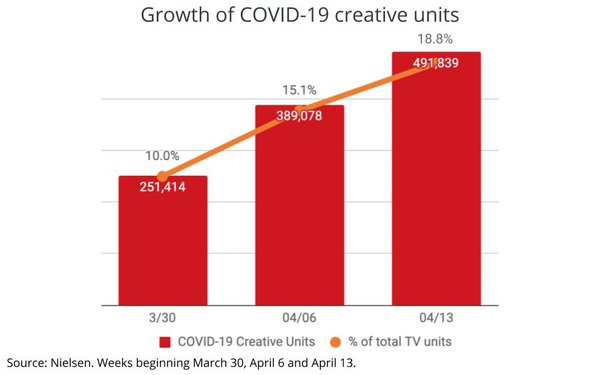 In the thick of massive TV advertising changes at the end of March through mid-April, Nielsen says the number of COVID-19-related TV ad creatives airing on national TV and local TV stations doubled over the three-week period.

During that period, travel, retail and telecommunications categories dropped their overall number of creative units, while categories such as beer/wine and pharmaceuticals rose.

Nielsen cautions that brands going “totally dark for the rest of 2020 could be facing revenue declines of up to 11% in 2021.”

In a study Nielsen did with Wizer, a consumer research platform, it found that 72% of respondents considered a company's COVID-19-related efforts from commercials key when considering using a specific consumer packaged goods brand.