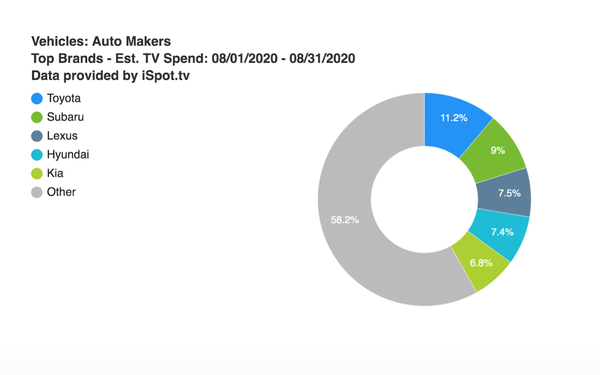 Automakers spent $287.4 million on national, linear television advertising in August -- only a 1% decline year-over-year, according to iSpot.tv.

A full month of U.S. sports provided major opportunities for ad impressions -- especially during NBA games, which had the most impressions of any live TV program for the month, according to iSpot.

“Many of the top automotive brands are flocking back to television, both with the return of sports and a desire to clear out 2020 inventory before the end of the year,” said Stu Schwartzapfel, senior vice president, media partnerships at iSpot.tv. “The trends we’re seeing right now -- as automakers ramp up advertising during NBA, NHL and MLB games -- will only continue as both college football and the NFL come back in September, too.”

In August, 8.9% of automaker ad impressions came during NBA games, while NHL games had 4% and MLB games had 1.9%.

Having more sports on television -- especially the NBA -- actually allowed auto brands to put a greater emphasis on those programs for impressions. Sports-related shows made up over 27% of impressions last month, compared to 25.8% in August 2019.

At this point, auto ads themselves have returned to typical summer messaging, emphasizing sales to help clear out the previous year’s vehicle stock and getting prepared for Labor Day sales in early September.

Nearly half of the top 20 ads by impressions highlighted “clearance” or “sales” messaging.

With spend nearly in line with last August, several brands showed either major increases or decreases in TV ad budgets.

Lincoln, Volkswagen, Infiniti and Chevrolet had the biggest declines among the top 20 brands, all decreasing spending by 31 to 46%. Still, 11 of the top 20 brands saw increases in spend compared to last August.

Impressions for the month remained fairly consistent among the top brands, with ebbs and flows largely related to days with more NBA and NHL playoff games.

Along with sports, auto brands also generated a good portion of impressions via cable news networks. Nearly 14.5% of impressions came during programming on MSNBC, Fox News and CNN, according to iSpot.tv.