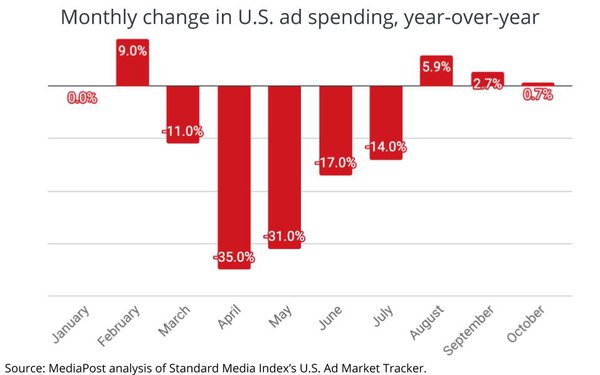 Year-over-year ad demand rose for the third consecutive month in October, albeit at its smallest rate since the U.S. ad economy began recovering from the COVID-19 pandemic.

U.S. ad demand rose 0.7% in October vs. the same month in 2019, according to a MediaPost analysis of Standard Media Index's U.S. Ad Market Tracker, which is derived from actual ad spending by the major agency holding companies.

That expansion is down from a 2.7% gain in September and a 5.9% expansion in August, the first month to see positive gains since the ad market crashed in March due to shutdowns caused by the pandemic.

The data also reveals some curious polarizations within the U.S. ad economy by medium and type of advertising category.

The top 10 advertising categories appear to have been driving the rebound, expanding 6.7% in aggregate in October, while all other categories declined 5.6% for the month.

Among media, digital continues to drive the expansion, rising a whopping 24.7%, and likely reflecting a shift by many big advertisers into accelerated digital and ecommerce strategies during the pandemic.

The national TV advertising marketplace, conversely, fell 13.0% in October, belying the industry consensus that the 2020-21 network TV scatter market has been relatively tight. 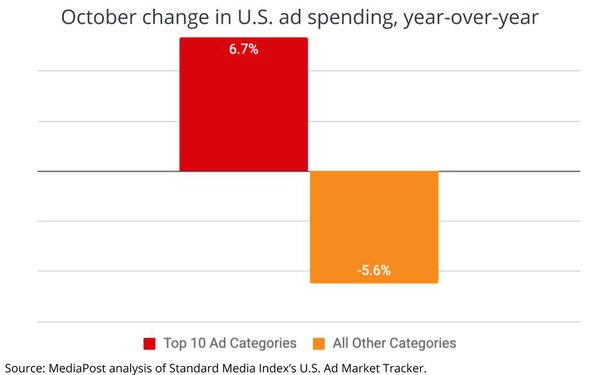