Amazon Reveals Zoox Robotaxi Monday -- Will It Move Into DOOH? 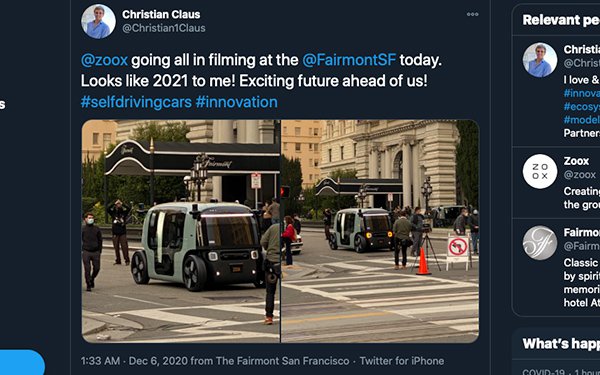 Amazon on Monday will officially reveal its Zoox autonomous taxi, which was spotted earlier this month on the streets of San Francisco in front of the Fairmont hotel while doing a photo shoot.

The bi-directional taxi could put Amazon not only in the digital-out-of-home advertising space, where traveling billboards are attached to moving vechicles, but ease the challenges of deliveries from online orders that clearly will continue even following the economic recovery from COVID-19.

In June 2020, Amazon acquired self-driving car startup Zoox in a deal estimated to be worth more than $1 billion.

The company developed a bi-directional vehicle with no steering wheel or front or back end, allowing it to travel in either direction. The company said it would begin testing it this year.

While Waymo set out to modify existing vehicles, and Uber announced earlier this month the sale of its self-driving arm to a firm called Aurora, from the start, Zoox aimed to design a custom vehicle -- a robotaxi -- from the ground up.

At the time of Amazon’s acquisition of Zoox, Colin Sebastian, senior research analyst at R.W. Baird Capital, wrote that “Zoox may become the foundation of Amazon's autonomous delivery fleet. If Amazon can use the ‘under the hood’ AV technology to deploy a fleet of delivery vehicles, drones and freight haulers, we would expect faster speed of delivery (think 1-2 hour Prime vs. 1-2 days), improved reliability/service, and just as important, a significant reduction in unit costs.”

Until now, Amazon's lack of mapping technology is its Achilles heel.

He wrote in the research note that it is one reason the Amazon Fire phone failed, and why the company still relies on third parties such as Here to power mapping technology in other apps.