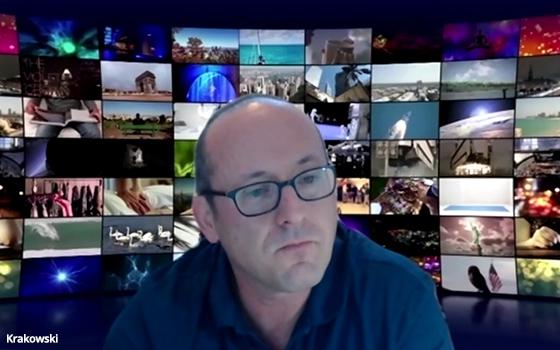 As the world watches the same content simultaneously, deepdub, an Israel-based startup, will announce the launch Wednesday of a platform aimed at revolutionizing global entertainment.

Advanced artificial intelligence (AI) and deep-learning technology power the platform to localize content into multiple languages at the click of a button.

“We plug into the post-production process,” says Oz Krakowski, CMO at deepdub.

With a 95% accuracy rate, the ability to synthesize the voice and match the facial gestures required to pronounce words through AI will become one of the most important tools for the entertainment and the advertising industries in 2021.

The audio can be translated into six languages -- with more to come -- while retaining original voices and expressions. A TV episode of about 1 hour and 45 minutes will take up to two to three weeks, Krakowski said.

The entertainment industry has been challenged with trying to globalize content for international audiences in their native languages for decades. Dubbing traditionally has been a lengthy and expensive process that results in disjointed viewer experiences across formats and languages, yet streaming content continues to expand both in viewership and content options worldwide.

In fact, 59% of U.S. adults said they would rather watch foreign-language films dubbed in English than see the original feature with subtitles, according to data published earlier this year by Statista.

The company also plans to use the technology for audio in advertisements, and to create a real-time version for sports, allowing the technology to translate on the fly into multiple languages.

AI, deep learning and neural networks allow the company to synthesize the audio to make it sound like the original voice, but in a different language. It gives the content owner the ability to design the voice.

“Think about advertisements,” Krakowski said. “The content creator can take one ad made in English for the U.S. market to use in the Australian market and there will be a different emphasis in each spoken word.”

The technology is a managed service that deepdub controls. There is no portal and it is project-based for enterprises and major entertainment companies, many of which already have signed up.

"We are moving toward the point of real-time dubbing that will enable sports events to be accessible to broader audiences. We expect to hit this milestone in the short-term future."

The concept for the technology was created in 2019 by Ofir Krakowski and Nir Krakowski. Both were in the Israeli defense force, but Ofir Krakowski formed an innovation team based on AI.