Google Services Just The Beginning Of Subscription-Based Offers In 2021 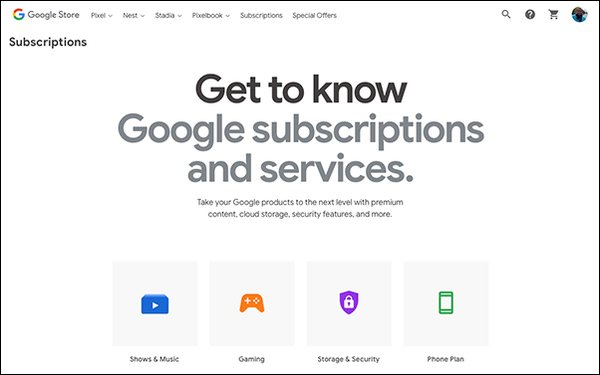 Apple created the hardware, and then a services business. Subscriptions followed, no doubt to offset any future declines in advertising based on antitrust lawsuits.

In any case, 2021 will be the year of subscription services.

While the majority of Google’s apps are free, based on the ability to offset the costs with advertising, the company during the past few years has built several paid-service tiers led by YouTube for streaming television and music. As 9to5google points out, The Google Store pretty much advertises offerings with a dedicated subscription landing page.

What does that mean for brands? "Good question," said Jonathan Kagan, vice president of search at Cogniscient Media, a 9Rooftops brand. When asked whether it would lower the price for advertising, he said this was unlikely. "Google never does anything that makes them less money," Kagan said. "You can lower the base price, but it will bring them in more volume, theoretically."

But the company might want to further diversify its products and services based on any restrictions that forthcoming antitrust lawsuits may bring.

On the home page it reads: "Your subscriptions work better with our packages." Those packages are broken down into Video Entertainment, Audio Entertainment, and Security. There are bundles and plans for services such as phone, television, music, and security. These services generate combined data, along with Nest, which Google insists are tying with users' Gmail accounts.

Google argues that its hardware works best with its hardware and the paid services. Offerings tied to the subscriptions are divided into four categories:

In November, TripAdvisor said that “in a couple of months” it would offer consumers a subscription service. Those who buy into the package will initially get discounts on tens of thousands of hotels worldwide, and discounts off attractions sold through the service, which were last counted to number nearly 400,000.

During the summer, Twitter posted a job for an engineer who could help build a subscription-revenue platform, after realizing the importance of a diverse revenue mode, whether direct-response or subscriptions and commerce. In the company quarter, Twitter will experiment with regard to premium services that consumers and businesses may choose to pay for, Ned Segal, Twitter CFO, said on the company's latest earnings call.

"You'll see us try all kinds of different things," he said. "It could be higher-quality video. It could be analytics. It could be business presence. It could be the ability to look at something in a different way than you might be able to today."

During the next few quarters, he said, the industry will see Twitter experiment with subscription service ideas for tangible revenue opportunities. Services aren't something Google has really focused on in the past, but they are now, and that’s why this is important.