How Data Models May Have Helped Prevent Chaos At Capitol Building 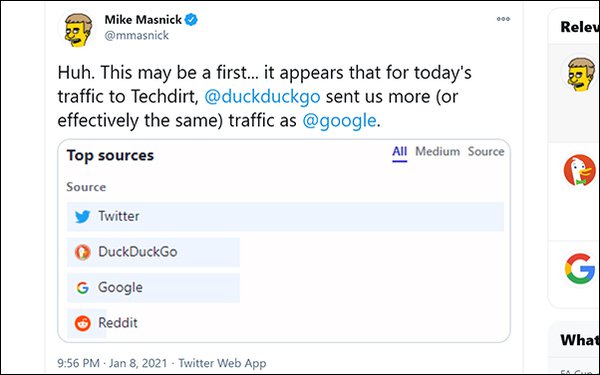 Advertisers use data and machine-learning models to determine the "perfect" message to target consumers with ads at very specific moments in time on a variety of platforms, from search to connected television, so why can't these data models built on sentiment and interests predict violence and threats?

Media sites like Twitter, Facebook, and Google should have the ability to run data models to determine chaos at physical buildings based on sentiment, intent and geolocation data. Their algorithms manage to identify all sorts of consumer actions, why not future actions.

“Social media's underlying algorithms are undoubtedly effective at contributing to usage even among consumers bothered by what they know about the problematic content on the platforms,” wrote Brian Wieser in a note published Sunday, alluding to the fact that consumer action, actives and consumption patterns may “partially enable the presence” of some conspiracy theories consumed by others.

Colin Sebastian, Wall Street Analyst at Robert W. Baird, asks on Twitter whether it really is so difficult for Twitter, Facebook and YouTube to filter content that can incite violence, and who or which algorithms can read the future as to predict what content will incite violence even before the violence begins.

Amazon, Apple, Google, Facebook, Twitter and others took drastic steps this past weekend to reduce hate speech they say incited people to break into the Capitol building on Friday and destroy property, putting lives at risk.

The tweets that got President Trump banned from the social sites and app stores were far from his worst. “The 75,000,000 great American Patriots who voted for me, AMERICA FIRST, and MAKE AMERICA GREAT AGAIN, will have a GIANT VOICE long into the future. They will not be disrespected or treated unfairly in any way, shape or form!!!” Wired wrote.

It wasn’t about that tweet. The problem has been brewing for some time, and his assertion that “the election was stolen from me” was the statement that social media and tech companies say led people to deface the Capitol building.
When Trump later told the rioters to “go home,” the message, all but lost in the heated moments leading up to the break-in, fell on deaf ears. He also repeated the false claim motivating the riot, namely that the election had been "stolen from him,” Wired wrote.

Some might ask why government leaders didn’t see this coming, with the ability to collect all types of data and monitoring of social networks, and why they did not take precautions before it unfolded.

“You should take steps to limit Facebook’s data collection. While you can shave the money FB makes selling ads targeted to your interests, this tactic isn’t as effective as spending less time — or no time at all — on the service," Signed #DeleteFacebook.

Spending less time on these social platforms sends a message much stronger than deleting accounts. Less time on Facebook and Twitter means brands will spend less advertising dollars on these platforms.

The sponsored ad from DuckDuckGo --  a search engine focused on protecting consumer privacy -- links to an article on FastCompany that suggests less data is a good idea, meaning giving less data for them to work with by using the platforms less. It suggests consumers should take steps to limit how much Facebook knows about users. As long as consumers use the service, it can monetize their interests and activity.

When someone tweeted to Masnick, “Interesting, is Facebook always that low for you?” he responded by tweeting “Yup. Usually lower. We get nothing at all from Facebook.”

Facebook, not in the screenshot, produces much less traffic to TechDirt, he wrote.

What’s the answer? Perhaps shaving the money Facebook makes from selling ads targeted to consumer interests. The tactic, however, “Isn’t as effective as spending less time — or no time at all — on the service,” writes Rob Pegoraro, writer at FastCompany.

On Saturday, John Matze, the CEO of conservative site Parler, responded angrily after Twitter founder Jack Dorsey endorsed Apple's removal of the social network from its app store. The app also was banned by Google. Amazon Web Services followed by suspending the site from AWS, threatening to take the conservative site offline indefinitely.

Amazon, which hosts the platform, said Parler had violated its terms of service based on faltering content-moderation practices. The site will come down just prior to midnight Pacific on Monday.