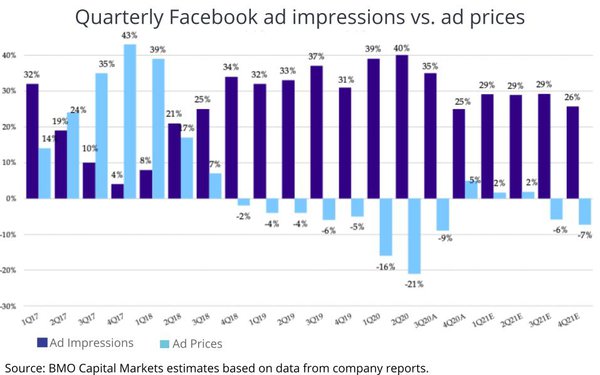 Facebook delivered its best ad revenue quarter in more than two years. Total ad revenues rose 31% over the fourth quarter of 2019, its strongest gains since the third quarter of 2018.

The company attributed the increased demand to a strong holiday shopping season, as well as the “ongoing shift” of retail to ecommerce and performance marketing strategies.

The company, however, warned of a “moderation or reversal” of the positive advertising trends going forward, and also cited Apple as one of its greatest threats, not just the consumer technology company’s new user identity protocols -- and how they might impact the efficacy of Facebook’s ad targeting -- but in a more general sense.

“We increasingly see Apple as one of our biggest competitors,” Facebook CEO Mark Zuckerberg said during the company’s earnings call with analysts and investors, explicitly signaling out Appel’s iMessage messaging platform as “a key linchpin of their ecosystem.

“It comes pre-installed on every iPhone and they've preferenced it with private APIs and permissions, which is why iMessage is the most used messaging service in the U.S.”

Zuckerberg asserted Apple is leveraging the market power of its messaging dominance to gain “share in apps and services against us and other developers.

“Apple has every incentive to use their dominant platform position to interfere with how our apps and other apps work, which they regularly do to preference their own,” Zuckerberg continued, concluding with Facebook’s anti-Apple campaign rhetoric that it is hurting smaller brands.

“This impacts the growth of millions of businesses around the world, including with the upcoming iOS14 changes, many small businesses will no longer be able to reach their customers with targeted ads,” he asserted. “Apple may say that they're doing this to help people, but the four moves clearly track their competitive interests. I think this dynamic is important for people to understand because we and others are going to be up against this for the foreseeable future.”