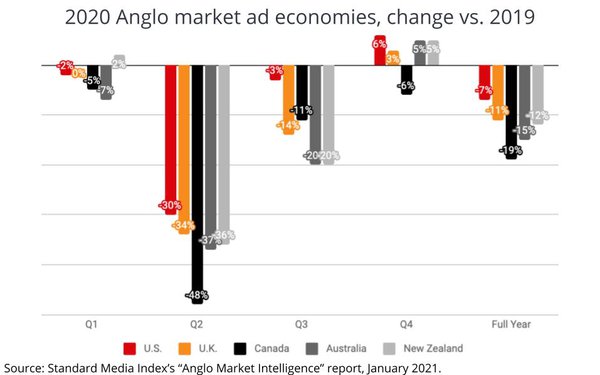 Like much of the rest of the world, the 2020 pandemic-influenced ad recession had a pronounced impact on all of the major Anglo markets -- the U.S., U.K., Canada, Australia and New Zealand -- tracked by Standard Media Index (SMI), but there appears to have been less of a lag for the U.S. pulling out of it.

That is one of the main findings of SMI's just-published Anglo Market Intelligence report, which shows ad spending across the five nations averaged an 8% decline during 2020 vs. what advertisers spent across those markets in 2019.

That's the equivalent of a $7.6 billion decline in total ad spending, which was most pronounced during the second and third quarters of the year.

“We definitely saw the bottom of global advertising demand in the second quarter, but as the markets adjusted to a new ‘COVID normal,’ the level of demand has begun to return," states SMI Global CEO James Fennessy, adding: "The third quarter saw an increase in spend, bringing the collective total across all five markets up to -6%, and then returning to strong growth of +5% in the fourth quarter."

Not surprisingly, the SMI data confirms that traditional media were most adversely impacted, with TV spending declining 13%, and other non-digital media plummeting 34% across the five markets for 2020, while digital ad spending actually rose 4%. 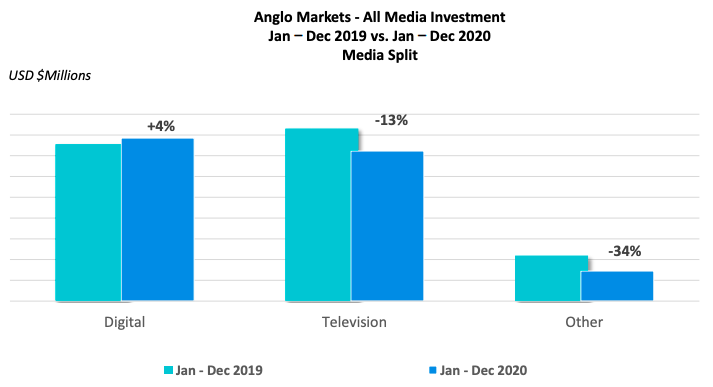