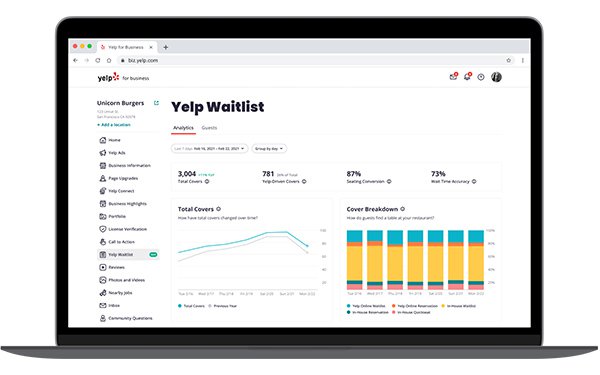 California small- to-medium-sized business owners have been battling Governor Gavin Newsom’s lockdown order for nearly a year. Many restaurants took a unified approach in “peaceful protest” and remained open, such as one of my favorites in Huntington Beach, The Black Trumpet.

Some restaurants did not survive. In fact, nearly 98,000 businesses across the United States closed permanently between March and September, according to Yelp, which built out many of its services throughout the past year to support small- to-medium size businesses.

There is much discussion about how the pandemic changed consumer behavior, but it also changed business models.

Many family-owned restaurants transitioned from being popular local dine-in eateries to serving only takeout food. They relied more on technology, search engines, website and app ordering, and sidewalk dining just to survive the pandemic. This setup could become permanent.

Some restaurants reportedly didn’t know their food was available through an app. The Virginia General Assembly wants to pass a bill — The Fair Food Delivery Act — that would require app-based delivery companies like Uber Eats, Grubhub and DoorDash to work more closely with restaurants to create a formal agreement before advertising their menu options and delivering their food.

The Fair Food Delivery Act is modeled from a law with the same name that went into effect in California, but other changes have also impacted the restaurant industry.

On Tuesday, Yelp announced the expansion of its restaurant Waitlist feature to manage takeout and curbside pickup orders in addition to dine-in service.

Share of consumer restaurant searches for takeout on Yelp rose by 3,200% since March 1, 2020, and even as recent as February 1, 2021, have remained 2,265% above prior levels (YoY). Throughout the summer when dining outdoors became popular, searches for takeout remained high with a 2,800% increase YoY. Yelp predicts that consumer interest in takeout will remain long after the pandemic eases.

Yelp also released an analytics tool, Guest Profiles, and an upgraded Point of Sale (POS) integration for Waitlist to provide details of restaurant performance. Hosts can keep track of all pickup orders and enter new to-go parties in the app, as well as text patrons when orders are ready.

Nathan Hughes, director of operations at Mr. Stax, the management company operating several IHOP franchises, piloted the Waitlist takeout feature. With 36% of Waitlist use geared toward takeout orders between January 11 and February 11, they received nearly 3,500 total to-go orders across the top 30 locations.

Hughes told Yelp the biggest benefit was the ability to communicate directly with guests. For example, letting them know if their order isn’t quite ready when they arrive and then texting them once it becomes available.

Other updates for restaurants include guest profiles, and point-of-sale integration. Updates for customers include a new section for business pages where restaurants can post their most popular dishes, which links directly to their menu.

There’s a dish and photo search upgrades. When users search for a particular dish in the Yelp app, it will serve up images of that dish under each business listing in the search results. Users of the app can easily search for photos on Yelp business pages from Android and iOS mobile apps.