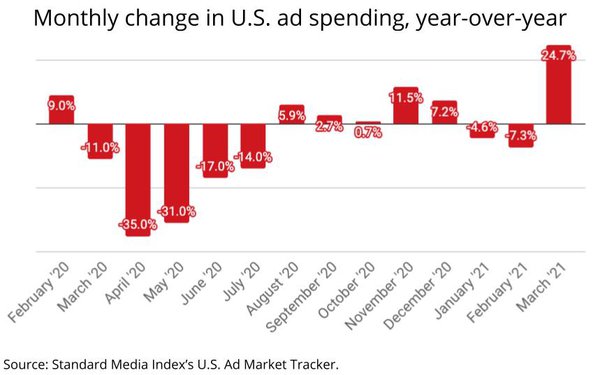 In the first year-over-year comparison with a month impacted by the 2020 COVID-19-related ad recession, the U.S. ad market expanded nearly 25% vs. the same month last year. Importantly, it was the best March since Standard Media Index (SMI) began indexing the U.S. advertising marketplace, and it was up 7.2% vs. March 2019 -- more than making up for any erosion in 2020.

The data, which is processed from actual ad spending made by agencies representing 90% of actual U.S. ad spending, is deemed representative of the total U.S. ad marketplace, and it indicates that Madison Avenue has likely completely recovered from last year's ad recessions, which lasted from March through July 2020, although there were downward blips in September and October, as well.

The data also reaffirms an explicit year-over-year analysis released by SMI late last week, which showed a linear increase of 22% in national ad spending between March 2020 and March 2021.

As with SMI's linear analysis, the U.S. Ad Market Tracker shows digital media demand outpaced the rest of the marketplace in March. National TV has also increased markedly, although it still is below water relative to March 2019.

As has been the case throughout the advertising recession and recovery, the biggest advertising categories have led the way. 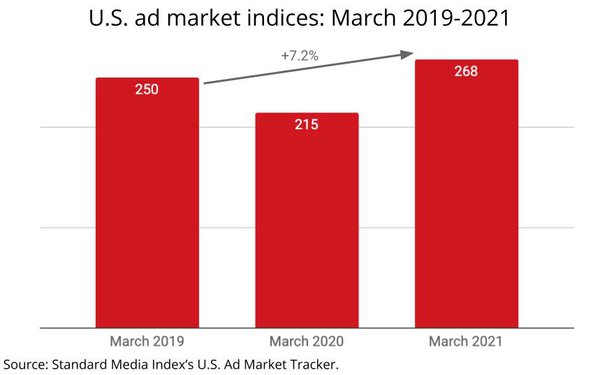