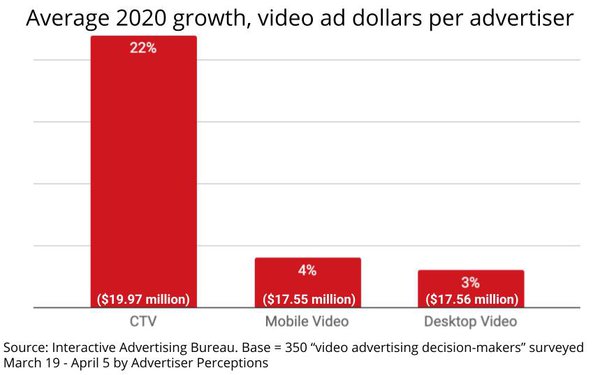 Connected TV (CTV) was the fastest-growing segment of the digital video advertising marketplace during 2020, expanding an average of 22% per U.S. advertiser, according to findings of a study of 350 "video advertising decision-makers" (both advertisers and agencies) surveyed by Advertiser Perceptions for the Interactive Advertising Bureau.

The study, which was fielded March 19 to April 5, found an average annual ad budget of $19.97 million was invested in CTV during 2020, making it the biggest slice of the digital video ad pie.

By contrast, mobile video ad spending rose an average of 4% to $17.55 million per advertisers, while desktop video rose 3% to $17.56 million.

“This is a bellwether moment in media that reflects the continued acceleration and shift to digital,” IAB Media Center Vice President Eric John said in a statement provided with the release of the IAB's "Video Ad Spend 2020 & Outlook for 2021" report this morning.

“While we are seeing growth across all digital video, the movement to more audience-based buying approaches has resulted in increased buyer demand for CTV," he continued. While not explicitly citing it, the move to CTV likely was accelerated by the impact of the COVID-19 pandemic, which influenced both consumer adoption, as well as advertiser strategies with video advertising.