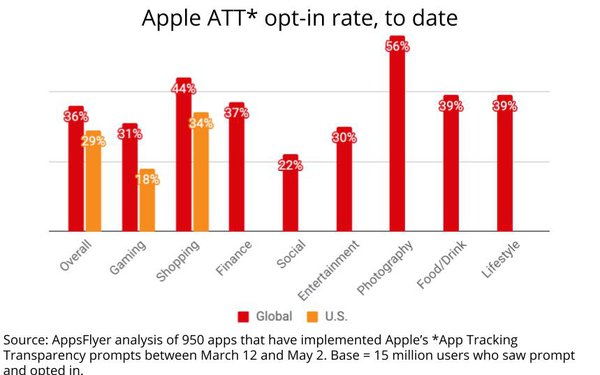 One week into Apple's enforcement of its app tracking transparency (ATT) framework, only a fraction (13%) of developers have actually implemented it within their apps, according an analysis of app developers that have implemented the tracking opt-in prompts so far.

Noting that only about 8% of iPhone users have actually upgraded to Apple's iOS 14.5 operating system so far, the report notes, however, "there's no urgency to it."

The analysis, which looked at data covering 950 apps that have implemented ATT since March 12, and especially during the first week of Apple's enforcement (April 26 to May 2), suggests that much of the industry's angst over the change may be a little overblown.

You can access AppsFlyer's interactive dashboard analyzing the data for yourself here, but the bottom line is that about a third (36% globally and 29% in the U.S.) of iOS 14.5 users have already opted into tracking.

Not surprisingly, the opt-in rate varies by type of app -- from a low of 22% for social media apps to a high of 56% for photography apps -- and there does appear to be some differential for the U.S vs. worldwide consumer opt-in behavior, but overall, it's not the end of the identity tracking world as we know it. At least, so far.

"With uncertainty still high, many apps are waiting to better understand market reaction, trends, and best practices before making the change," the report notes, adding: "The million dollar question is when should apps implement ATT? We’ve seen in previous versions that it takes 4-6 weeks to reach 30% adoption so apps should prepare sooner rather than later."

Among the initial findings is that while most app developers are still leaning into in-app advertising models, gaming app developers appear to be emphasizing in-app purchase revenue models, which makes sense, given the nature of the gaming experience.

And on the plus side, there does appear to be some incremental ad spending on other mobile operating systems to offset any iOS erosion: