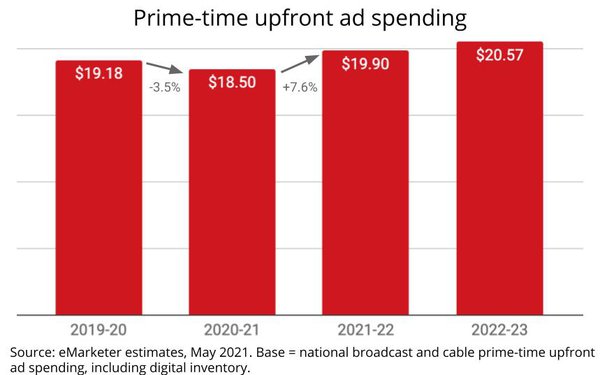 Following a similar recovery with other advertising platforms, the U.S. TV upfront market is estimated to climb 7.6% this year to reach $19.9 billion for the 2021-2022 TV season, according to eMarketer.

These results include ad spending on all national linear broadcast and cable TV platforms, including digital media.

For the last TV season, Media Dynamics estimates there was a total of $2.9 billion in cancelled upfront commitments due to pandemic disruptions -- around a 13% drop from the initial estimated upfront spend for that season, which was $21.9 billion for that year.

In a typical year, eMarketer estimates advertisers cancel about 4% of their upfront commitments.

For the 2020-2021 season, eMarketer now estimates there was a 3.5% decline in upfront TV spending. In June of 2020, it predicted a 27.1% decline in initial upfront spending commitments.

National TV upfront deals are where major brand advertisers make ad commitments ahead of the TV season that begins in September. It is estimated to amount to around 70% of all TV network ad spending for a typical season.