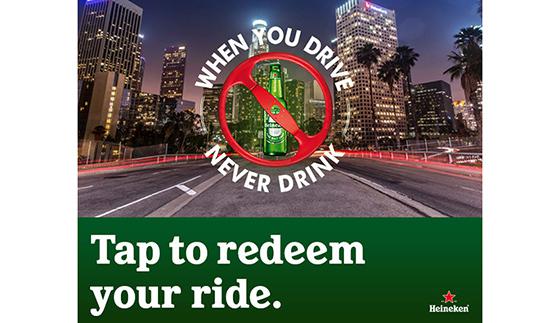 Californians using Google’s Waze ride-share app to get to airports, beaches, and parks and perhaps even bars this Memorial Day holiday weekend could see a Heineken USA ad — not for alcohol, but for a free Uber ride. As businesses begin to re-open and people travel to see friends and family across the state, reminding people to stay safe — not drink and drive —  becomes important to save lives.

Heineken launched an anti-drunk driving campaign that will serve messages to Waze users if they enter a destination in the GPS-enabled mapping app that is likely a place where alcohol is consumed.

The campaign, which begins this weekend, uses targeted in-app notifications and offers a voucher to encourage consumers not to drive when they drink.

Heineken USA is the first alcohol company to partner with Waze in the United States, and serve the message “when you drive, never drink” in the spot where app users can tap to redeem a free Uber ride. One smart thing both companies do, get the buy-in from users who download the app to collect their data.

The campaign focuses on moderation and reminds consumers through messages that there is always a choice to drive safe and not get behind the wheel if they consume alcohol.

Of course, there are options to drink at home, buying the alcohol in advance or ordering it through a delivery service such as Drizly.

But after being stuck at home for more than a year as a result of COVID-19 government lockdowns, the chances of people traveling and visiting friends this weekend becomes greater.

Drunk driving is still the number one cause of death on American roads, and while research from the National Highway Traffic Safety Administration indicates that drunk driving fatalities have declined 21% during the past five years, there is still work to be done, according to Mothers Against Drunk Driving (MADD).

This partnership is part of a broader anti-drunk driving campaign — Heineken’s "When You Drive, Never Drink" global campaign — and adds to its growing list of collaborations aimed at encouraging better decision-making on the road.

The company first joined the Techniques for Effective Alcohol Management (TEAM) Coalition in February 2015, an alliance that allows the company to promote messages about responsibility and encourage positive fan behavior at sports and entertainment facilities.

Heineken, which pledges to serve messages to 1 billion consumers annually, last month announced its 2030 Brew a Better World program — a new set of ambitious commitments aimed at driving a positive impact on the environment, social sustainability and the responsible consumption of alcohol.

Brew a Better World includes pledges to decarbonize its production by 2030, cutting its overall emissions by 30%.

The company plans to reduce its carbon footprint working closely with customers, consumers and suppliers, and pledges to eliminate sending waste to landfills from its 166 production sites by 2025.