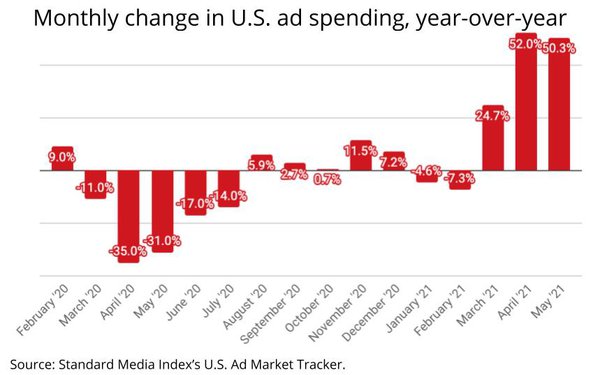 The U.S. ad recovery continued in May -- posting a 50.3% increase over May 2020, which was one of the worst months of the COVID-19-influenced advertising recession last year.

May's increase tracks with April's 52% year-over-year increase, although it is exactly even with May 2019's ad market value, indicating that Madison Avenue is back where it was two years ago.

But the big story for May is that smaller ad categories had the biggest recovery, according to a MediaPost analysis of Standard Media Index's U.S. Ad Market Tracker, an index derived from actual ad spending processed by the major agency holding companies.

While the top 10 ad categories' ad spending rose 41.0% over May 2020, all other categories were up 69.3%, indicating that the U.S. ad industry's recovery isn't just happening among the nation's biggest advertisers.

Also significant is the fact that all other categories now have a higher aggregate ad-market index value (259) than the top 10 (258) in May, marking the first time smaller ad categories have surpassed the top 10 since 2013, when Standard Media Index began benchmarking it.

In terms of media, TV continued to rebound -- posting a 25.4% increase over May 2020, although the May national TV advertising marketplace still is 20.0% below the same month in 2019. 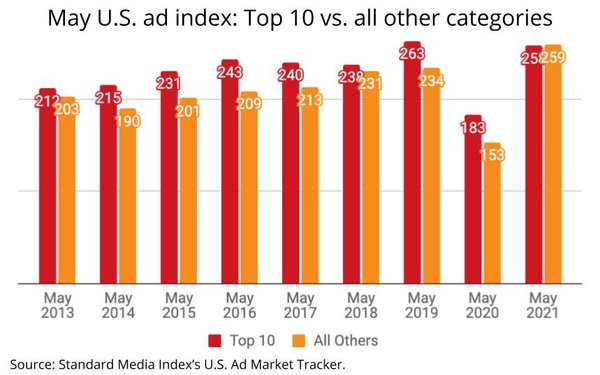