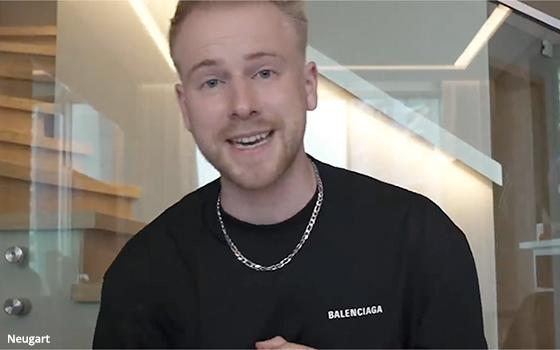 Data is more valuable than consumers and advertisers may think. Rafael Neugart, an Instagram influencer and celebrity known for his RayFox YouTube channel in Germany, set out to prove that.

Neugart announced on Instagram at the beginning of June that he would sell his entire search history for sale on eBay.He has several hundred thousand followers on social networks.

"I've been a successful YouTuber for eight years and you can't imagine what kind of absurd things I'm looking for in my videos - and what kind of weird advertising I get displayed because of it," Neugart told one media outlet.

The stunt was a campaign by Neugart, Foundry and privacy search engine Startpage. It was intended to demonstrate violations of user internet privacy.

Neugart listed his internet search history on eBay and then asked Instagram fans how much they would pay for his search history. More than 11,000 interested people visited the eBay listing page, within a few days 70 bids were received, and the highest bid was 110,000 Euros (more than $130,000).

Then eBay stepped in and shut down the auction, stating that the price was unreasonable, according to Startpage.

“Conventional search engines know our most intimate thoughts, fears and dreams -- and they benefit from them,” he said. “This knowledge is compiled into a digital profile and sold, mostly to actors who then address us with targeted advertising, set price trackers on us or willfully disseminate false information.”

Neugart later revealed on his YouTube channel in a video that it was a stunt. The video has more than 60,000 views.

BuzzLearn, a website that enables people to learn about celebrities, estimates Neugart’s net worth or net income between $1 million and $5 million, with most of his wealth coming from a career as YouTube star.