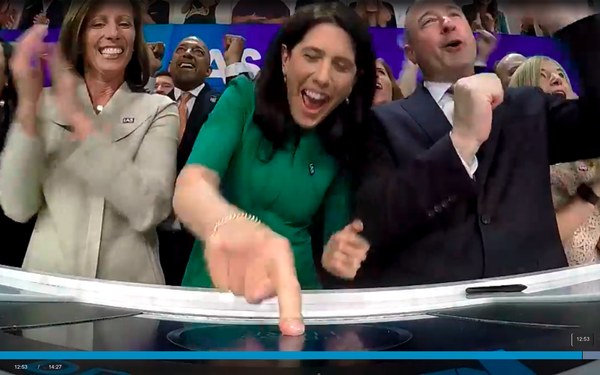 “It’s an historic day for IAS,” she said. “Being a first-time female CEO … it’s a thrilling experience.”

The digital ads verification company competes with DoubleVerify, which went public in April. DoubleVerify shares rose 19.26% in the past month.

IAS shares closed up 14% on Wednesday afternoon from an IPO price of $18, which valued the company close to $3.3 billion.

“We reached a level of scale, growth and leadership position that resonates with the public market investors,” Utzschneider said. “We’ve had accelerated growth, with high interest and high demand.”

There are three areas of growth for IAS: programmatic, live feeds in social, and connected TV.

Utzschneider said the company launched a pre-bid contextual targeting solution in the midst of COVID-19, and saw high demand, as the industry phases out browser-based cookie ad targeting.

There is also an opportunity with social platforms and live feeds. Twitter announced last year that it would build a verification system into its platform, and chose IAS as one of its partners. Connected TV also has become a catalyst for growth, she said.

Advertisers can expect additional investments from the company in programmatic, social platforms and connected TV, as well as expanding globally.

The majority of IAS’s business -- 60% -- comes from the U.S. market, compared with 40% internationally. The company continues to grow faster internationally,” she said.

The company also will focus on eliminating wasted media. “Hundreds of billions of dollars are wasted,” she said. “Fraud alone is a $100 billion problem.”

Other IPOs expected in 2021 range from an Amazon-backed electric vehicle to a popular grocery-delivery app to a doughnut maker, according to Kiplinger, an investment publication. These might include Nextdoor, Instacart, and Crispy Crème, according to Forbes.