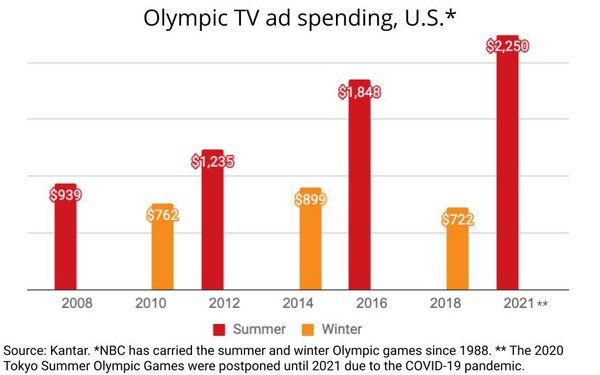 Despite some big question marks concerning attendance, fan enthusiasm and athletic performance for the Tokyo Summer Olympic Games, Kantar on Thursday forecast it will set a new record for U.S. TV advertising sales at $2.25 billion.

The Summer Games -- which were postponed from 2020 due to the COVID-19 pandemic, have been a moving target of expectations -- as the Tokyo organizing committee has adapted guidelines for spectators.

And while it may be unclear how that translates into televised audiences for this summer's games, Kantar projects that ad revenues for U.S. Olympic broadcaster NBC will be 20% higher than the $1.848 billion it took in in 2016, the last summer games.

Citing its own proprietary research, Kantar said 63% of the U.S. population is interested in watching the Tokyo games, although 53% still believe they should be postponed further or cancelled altogether.

“Many Olympic sponsors are hastily adjusting to the ever-changing narrative around the Tokyo Olympics,” Kantar Senior Vice President Brand and Marketing Satya Menon notes in a statement released with the forecast. ”Brands are rightly concerned about optics, and need to carefully adjust the tonality of their communication, keeping in mind that in much of the world, consumers are stressed, angry and less hopeful due to the pandemic.”

Noting that the postponement likely resulted in some reductions in ad spending, Kantar nonetheless said "major declines seem unlikely," noting: "First, much of this ad spend was already committed prior to the pandemic, with NBC stating it had already sold $1.25 billion in advertising by March 2020. Second, event sponsors like Coke, Visa and P&G have continued their support for the IOC and the Games."