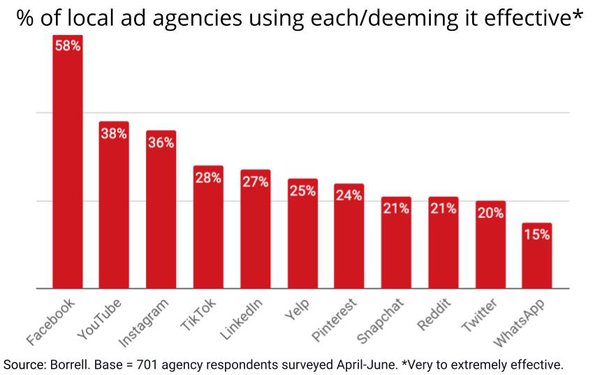 The study was conducted with 701 local ad agencies across the country, of which half have less than 10 employees. Seventeen percent of these agencies are now using TikTok -- “more than double” what Borrell saw in its survey conducted six months ago.

“TikTok is moving up in recognition and we’re keeping an eye on it,” says Corey Elliott, executive vice president of local market intelligence at Borrell. “It's exciting to engage it because it's a completely different ad model...you're leaning on an algorithm.”

The format also matters. “Local advertisers are very, very interested in anything video, anything with a moving image,” Elliott adds. “There's been a great groundswell in recent years of local advertisers going to YouTube, embedding video anywhere they can.”

Elliott thinks TikTok will be the next iteration in the video-ad evolution. Why? Because agencies are feeling pressure from local businesses that are asking “what’s this whole TikTok thing?”

It’s a necessary question when TikTok’s U.S. user base, now at around 100 million, has been aging up over the past year.

Once a social media platform made up primarily of kids and teenagers (10-19 years old), TikTok is seeing that age demographics in the U.S. are broadening rapidly.

With a broadening market, TikTok looks to be a potential answer for a wide array of local advertisers and agencies trying to gain awareness digitally.

But according to Elliott, doing so successfully takes more than just “shooting a funny video.” “Nobody’s thinking about the overall marketing plan,” he says. “You’re doing these things, but who’s thinking about how all this fits together?”

It’s not hard to find evidence of small businesses that have gained massive success from TikTok.

But Elliott is right: it takes more than hoping one video goes viral. For example, Jenna Labiak has used TikTok to take her company, The Silk Labs, to the next level.

Although Silk Labs’ first video went viral, in an interview with Later from June, Labiak mentioned the greater importance of creating a community.
“I always like to give our audience a lot of value,” she said. “Instead of just 'selling' our hair products, I’ll go ahead and use them in a hair tutorial.” Labiak preaches four content pillars for small businesses using TikTok: “Tutorials, business advice, behind the scenes, and aesthetic videos.”

Elliot wonders whether Instagram Reels -- the best of which are seeing as much exposure as top TikTok videos -- might be a threat to TikTok because local businesses are already comfortable with that specific platform. “They’ll start with massive brands,” Elliott said, referring to TikTok, “but is it ever going to take off locally?”

Still, having seen that advertisers have become less satisfied with Twitter, Elliott suspects that TikTok -- at 17% of the 701 sampled users -- will soon take Twitter’s place, at 39% of users.

"I bet you the gap will start closing,” he says, “and TikTok will probably be in the top five.”